Today, the late jazz and blues icon Salome Bey gets her rare and classic self-titled debut album Salome Bey reissued, exactly 52 years after it first made waves and opened up the eyes and ears of the Canadian music industry. Bey, the American-born, Canadian singer-songwriter, composer, and actress who was affectionately known as “Canada’s First Lady of the Blues”, was both a GRAMMY and JUNO Award-nominated singer who sang with her iconic brother Andy and sister Geraldine as Andy & the Bey Sisters across the US, Europe and Canada, and recorded and released albums on the RCA Victor and Prestige record labels. The group was featured in the classic Chet Baker film Let’s Get Lost. 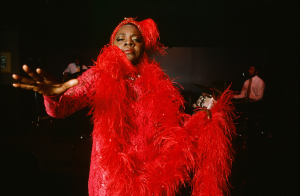 After moving to Toronto in 1964 and playing the jazz club circuit, she became known as “Canada’s First Lady of the Blues”. A larger than life arts and culture figure whose music, artistic output and influence was felt across the world, in both music and theatre, her broad list of multi-disciplinary art achievements and accolades was unprecedented, and included two album projects with jazz legend Horace Silver; two Dora Mavor Moore awards for Indigo, a history of black music she conceived, wrote and starred in; a GRAMMY nomination for Best Cast Recording, with her castmates, in Broadway’s Tony Award–winning Your Arms Too Short to Box with God .

“We are excited to announce the digital release of Salome Bey’s first self-titled solo album,” explains the Salome Bey estate.  “This album was originally recorded in 1970 and released through the Canadian Talent Library.  It features Bey’s signature performances of  standards like George Gershwin’s “Stardust”, the Canadian classic Gilles Vigneault’s “Mon Pays”, standout original composition, Rick Kardonne’s “Hit the Nail Right on the Head, and original compositions by Russ Little and Rick Wilkins”. Bey’s light continues to shine brightly less than two years after her passing, as she was honoured today with a special commemorative Canada Post stamp and video tribute .

The release of Bey’s debut recording provides an opportune time for jazz and blues music enthusiasts, fans, broadcasters, DJ’s, and music historians to both discover and rediscover her rare musical gems that led to a very long list of industry and societal accolades over the years, including being made an honorary member of the Order of Canada in 2005, and in 2021 was inducted into Canada’s Walk of Fame. Legendary hip-hop producer Larry Smith (Run DMC) played bass for Salome Bey during the late 70s and early 80s, and Bey also contributed vocals to the 1985 charity single “Tears Are Not Enough” recorded by a supergroup of Canadian artists that included Joni Mitchell, Gordon Lightfoot, Anne Murray, Bryan Adams and others, to raise funds for the 1983-85 famine in Ethiopia.