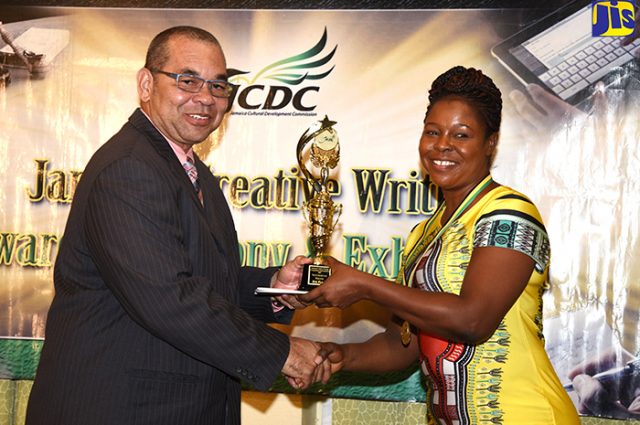 More than 70 amateur and professional writers who entered their works in the Jamaica Cultural Development Commission (JCDC) creative writing competition were recognised during an awards ceremony held at The Knutsford Court Hotel in Kingston on August 15.

The participants received awards in the categories of Poetry, Short Stories, Novels, Essays and Plays.

In her remarks read by Director of Entertainment, Policy and Monitoring in the Ministry, Gillian Wilkinson McDaniel, Minister of Culture, Gender, Entertainment and Sport, Hon. Olivia Grange, said that there has been growth in the number and quality of the entries in the competition over the years.

She said the writers represent the best of Jamaican creative writing in a very special year in which the country celebrates its 55th anniversary of Independence.

Ms. Grange emphasised that the Administration is committed to the development of the arts, of which creative writing is a part, arguing that “great art inspires, excites, beautifies, delights, challenges and also angers and confounds”.

She added that the Ministry is serious about capitalising on the potential of art to improve the quality of life for all.

“Through this competition, our Government provides opportunities for Jamaican writers to discover and validate their talent. The exposure given by this initiative has provided rewarding and life-changing opportunities for our community of local practitioners, demonstrating the power of the culture and creativity to move people from poverty to prosperity,” the Minister said.

Meanwhile, Ms. Grange said for a very long time concerns have been raised from various quarters that the country is losing much of its heritage, “because we do not document our stories enough”.

“We’ve also heard the concerns that when documenting happens, it’s too often done by outside sources. It’s incredible how much of our history is stored outside of Jamaica. This is a challenge that we must confront together as a country,” she added.

The Minister emphasised that the country’s heritage must be documented in a way that will be accessible to future generations.

“That means that we should be telling more of our own stories, in our own ways, from our own experiences and from our own perspectives,” Ms. Grange said.

For his part, Interim Executive Director at the JCDC, Orville Hill, congratulated the awardees, noting that they have used the competition as their medium to tell true tales of the Jamaican experience.

He said that, over the years, the JCDC competition has proven itself as one of the best challenges for providing Jamaican writers with the opportunity of recognising and validating their writing talents, while showcasing and promoting both the writers and their original work.

“We pride ourselves in having entries from both amateurs and professional writers, as they both bring their own strengths to the Jamaican literary landscape under the categories of poetry, short stories, novels, essays and plays,” Mr. Hill said.

The Interim Executive Director added that the writers have contributed to increasing the brand value of Jamaica, by virtue of their participation in the competition and exhibition.

The Jamaica Creative Writing Competition and Exhibition is one of the best channels for recognising writing talent, validating, showcasing and promoting the original works of writers.

In partnership with the National Library of Jamaica and the Jamaica Library Service, the Commission exposes the winning works in the Jamaica Creative Writing Competition in each parish, maximising the exposure of the awardees and their works and giving members of the public an opportunity to enjoy the best that Jamaica has to offer in creative writing.