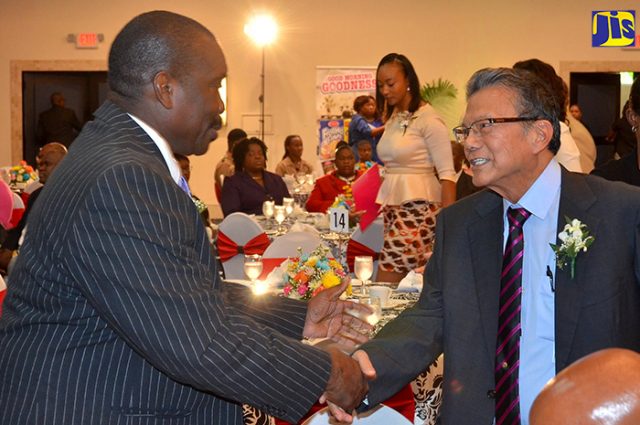 Photo: Minister of National Security, Hon. Robert Montague (left), is greeted by Founder and Executive Chairman of LASCO Affiliated Companies, Lascelles Chin, at the 2017/2018 LASCO Police Officer of the Year awards ceremony, held at The Jamaica Pegasus hotel in New Kingston on April 24.

“It is the intention of this Government over the next couple of years, through retention techniques and increased recruitment, to bring the Force up to its establishment levels,” he said.

The Minister was speaking with JIS News at the 2017/2018 LASCO Police Officer of the Year awards ceremony, at The Jamaica Pegasus hotel in New Kingston, on April 24.

Mr. Montague said he is also awaiting the findings of a recently completed study on the reasons for attrition within the Force, in order to deal with the issue, “as 420 men and women were lost last year and only 500 trained”.

Earlier this year, while addressing members of the Standing Finance Committee of the House, Mr. Montague revealed that members of the Force are being lost to neighbouring countries due to more lucrative salaries.

During the committee meeting, he noted that representatives from a particular Caribbean country have approached the Government for 10 officers to work in that jurisdiction.

Meanwhile, the Minister informed that, as of June 1, all smartphones will be pre-installed with the Stay Alert application.

The move follows an agreement with the country’s major service providers, Digicel and Flow.

Mr. Montague noted that the application continues to gain traction among Jamaicans, with more than 100,000 downloads, up from 2,000 last year.

“More Jamaicans are using the technology to communicate with the police, to report matters and to pass on information,” he said.

The Minister endorsed the LASCO Police Officer of the Year award, noting that it plays an important role by placing the Force in a positive light.

He saluted the company’s Founder and Executive Chairman, Lascelles Chin, for his “vision and patriotic spirit, which started this initiative 17 years ago”.

For his part, newly appointed Commissioner of Police, George Quallo, also hailed Lascelles Chin, noting that he and his company are invaluable partners of the JCF.

“We thank you for your unfailing support and investment in the fight against crime, and the development of our members,” he said.

Meanwhile, Mr. Chin said his company has invested $17.2 million annually in the staging of awards for police officers, nurses, principals and teachers.

The money goes towards covering cash prizes, support of the awardees’ respective community projects and their participation in international conferences overseas for training and development.

He said the awards go to the heart of LASCO and that his company feels strongly about the pivotal role played by these professionals in the public sector.

Corporal Stokely Fagan of the Major Organised Crime and Anti-Corruption Agency (MOCA) emerged the LASCO Police Officer of the Year, receiving a trophy and a cash prize of $250,000.

Second runner-up was Michael Hutchinson of the Mobile Reserve, who collected $100,000, while the first runner-up prize went to Hilette Virgo, who collected $200,000. She also received the most popular votes on social media, attaining 1,300 likes on Facebook.