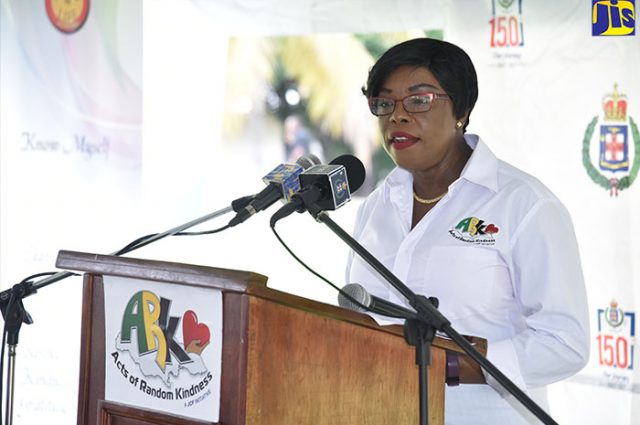 The Jamaica Constabulary Force (JCF) has partnered with the Northern Caribbean University-owned radio station, NCU FM, to do school tours across the island to sensitise students, teachers and communities about the Acts of Random Kindness (ARK) project.

The initiative, which is a violence interruption and prevention initiative geared at promoting kindness to combat destructive thoughts, words and actions, has been taken to schools to share its key message.

Speaking with JIS News, Deputy Commissioner of Police (DCP), Novelette Grant, who is on pre-retirement leave, said the project is one of the tools that should address the social ills that exist in schools and communities.

“We met up with NCU FM in January at St. George’s’ College, and now we are looking forward to our next school visit, which is scheduled for February 23 at St. Jago High School,” she said.

She noted that the partnership with NCU FM radio has helped the JCF reach more students in a fun and interactive way.

“We believe that adolescent bullying, violence in schools and even crime in communities can be confronted with in-school programmes, such as the ARK. The carefully integrated kindness messages and actions are necessary to see change,” DCP Grant said.

“When students start to think in kind ways, they become kind and we would love if they use this to counter the violence and the negative interactions,” she added.

DCP Grant, who spearheads the ARK project, said the initiative in quiet but impactful. “We are doing the groundwork, we are behind the scenes ensuring that ,through ARK, persons will know that there are ways to solve conflicts outside of fights, quarrels and killing each other,” she said.

She noted that the campaign is steadily impacting the minds of persons who hear the messages from the JCF team, especially the youth.

DCP Grant is encouraging Jamaicans to be a little more deliberate in their interactions. “Kindness is a state of mind, so think kind, act kind, then you will become kind,” she said.

The DCP said there has also been keen interest in the ARK project by a number of service groups and stakeholders.

The ARK builds on the JCF Youth Empowerment and Mentorship (YEM) programme, which has among its core values, kindness.