Micholle Moltan’s Death Will Not be in Vain, PM Holness 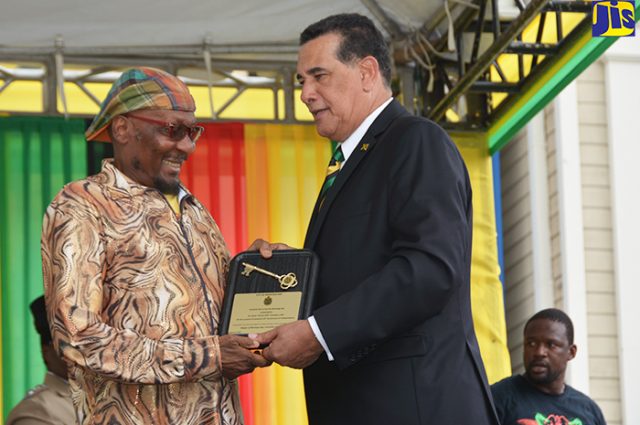 Internationally acclaimed reggae superstar, Jimmy Cliff, was on Sunday, August 6, handed the Key to the City of Montego Bay.

In front of scores of well-wishers, Mr. Cliff, who will forever be best known for his iconic role of ‘Ivan’ in the Jamaican classic, ‘The Harder They Come’, was honoured for his work over the years and for also being one of the most prolific entertainers of his generation.

His Worship, the Mayor, Homer Davis, who made the presentation during the Independence Uniform Parade and Civic Ceremony in Sam Sharpe Square, described Mr. Cliff as a humble giant and a true patriot.

“This is a man who represents everything that is right with Jamaica. He is not only an icon of the parish, but also an extraordinary man who has never forgotten his roots,” he said.

Mayor Davis also noted that the proposal to rename Gloucester Avenue (the Hip Strip) after Mr. Cliff is almost a reality, adding that “we will be doing another ceremony soon to show further appreciation”.

From the rural district of Somerton in St. James, Mr. Cliff made his movie debut in 1972 when director, Perry Henzell, gave him the lead role in ‘The Harder They Come’, a movie which is still revered today in international circles.

The soundtrack of the same name has also been critically acclaimed and remains one of the best-selling reggae albums of all time. It features a number of classic hits that include ‘Many Rivers to Cross’, ‘You Can Get It If You Really Want’, ‘Sweet and Dandy’ and the title track, The Harder They Come.

For his part, Mr. Cliff said he is happy for the recognition and felt humbled by being given the Key to the City of Montego Bay.

“I am happy and humbled to receive this honour in my own parish of St James. This place brings back a lot of memories, and this is something I will always cherish,” he said.

Photo and Story By Garwin Davis