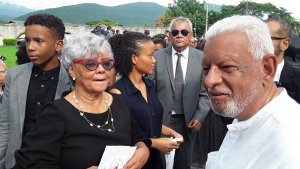 Mrs Baugh with white hair with bread and black dress. Other relatives and friends support her at the end of the Official funeral service of Dr. Kenneth Baugh. 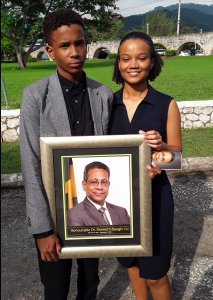 Grand niece and grand Nephew of Dr. Baugh. They hold his picture
lovingly outside the Chapel after his Official Funeral Service

“He served well but was so decent…was too decent to be a politician”. declared Hon. Karl Samuda. Dr. Kenneth Baugh died after a prolonged period of illness. He was eulogized as a man of unquestionable integrity and public servant extraordinaire.

At least four PMs one serving and three retired paid their respects to Dr. Kenneth Baugh who was 78 … was churched at the University Chapel, Mona, Jamaica W.I. last Thursday September 19, 2019 in an Official Funeral with white clad Police Officers carrying his Casket shoulder high … draped in the Jamaican flag.( See pictures attached).

It was a very large funeral with a tent for overflows. There were few dry eyes.

Hopeton O’Connor-Dennie SIC was there and filed this picture story for Vision Newspaper Canada.