Bert Samuels Should Get Legally Real

The National Voice of ESPN and Monday Night Football, Cayman Kelly, Signs Deal to Serve as Official Voice of the NHL

The Reggae Vaccine Album is up for Grammy consideration in three categories and three of the musicians on the Album have posted on their social media pages their request for the album to be considered for a Grammy nomination. 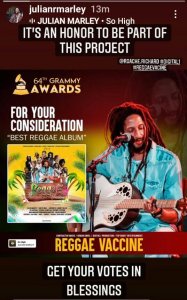 Bounty Killer made a post on all his social media pages for the album to be considered for Grammy consideration while Julian Marley and Aston Barrett Jr. of the Wailers posted on their Instagram stories to get Grammy voting recognition for the album. The album is up for consideration in the categories: Best Reggae Album, Album of the Year, and Best Album Artwork cover.

Julian Marley’s single on the album is a love song entitled, “So High” and Bounty Killer has a tribute to his mother entitled “Mama”. The Wailers are composers of the riddim that Julian Marley is on called, “The Strings Riddim”. 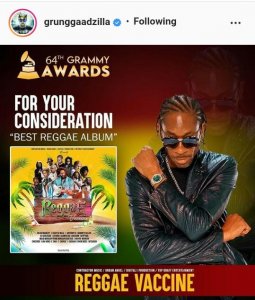 The album is a compilation of several riddims and is Executive produced by Sean “Contractor” Edwards. Other artists on the album include Anthony B, Wayne Wonder, Gyptian, Ed and Jethro Sheeran, Shatta Wale, and Mojo Morgan.

Some of the producers on the album include Digital One, Vertex Productions, Top Braff Entertainment, and Zj Ice of Zjp 103FM.