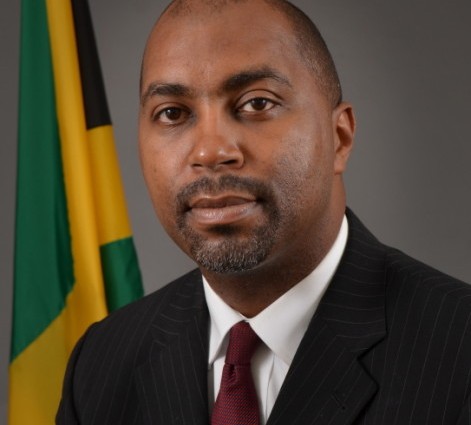 “Gas prices have gone up 60 percent this calendar year.”

“We are calling on the government to remove the Hedge Tax on gas which amounts to JA$6-7 billion dollars.” 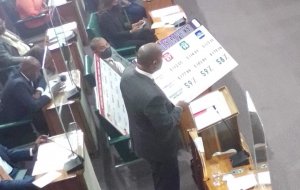 Julian Robinson displays gas prices chart. This was displayed in the Parliament on March 10, 2022. Photo by Hopeton O’Connor-Dennie

As a result of the gas tax, the government does not have to add any new taxes. The people are already being heavily taxed as gas prices increase, and other taxes go up. So there is no need to tax the people any further.

We need an update on the energy sector. When the PNP left office we had a commitment to look at renewables. We have yet to see any new renewable energy projects. A reduction on solar battery tax for solar units, that needs to be done.

“The Opposition is opposed to the divestment of shares in the Jamaica Public Service Company Limited. We need a seat at the table with the JPS. The vexed issue of electricity theft is a real issue. The government has a role to pay in this exercise. For example to connect to the grid is becoming more expensive. To wire a house could cost up to JA$150,000 dollars. Many cannot afford this cost. A fully privatized JPS may not be in the best interest of the consumer. ”

Many small business operators are serving and filling a need. Give some of the funds the micro business lenders. Micro businesses help to bridge the gap at the micro level.

“We need to look to agriculture for growth. Bodles need to be seen as a centre of excellence. Small farmers are being greatly affected by lack of fertilizer and praedial larceny. The fines for praedial larceny should be up to JA$5 million dollars.”

PC banks need to be repositioned as currently they have been changed to be like a normal commercial bank. Giving loans for cars etc. This is not what this bank was designed to do in the Jamaican society. I am aware there have been problems, and therefore changes had to be made. The PC banks need to return to their original concept. 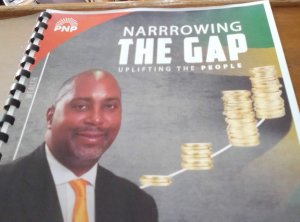 Turning to the education sector. He said the learning loss is greater than has been reported. We think the 6th form programme should be postponed for two years.

“I am disappointed that there is no allocation for the implementation of the Patterson Report.”

The pottery sector was not found in the list of organizations to get government assistance under the care programme.

“Madam Speaker, we call on Government to put people first, to give us a budget that balances the books while balancing people’s lives, and that narrows the gap, and uplifts the people. I thank you”

This is the Opposition’s reply to the 2022 Budget Presentation by Finance Spokesperson Julian Robinson.

Hopeton O’Connor-Dennie was in parliament and filed this report for Vision Newspaper.