Cadet Corps To Be Established In All High Schools

This is the latest centre to be established, as the Ministry of Justice seeks to coordinate alternative dispute resolution activities and enable easier access to justice services by members of the public. 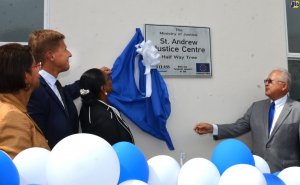 Constructed at a cost of approximately $20 million, with funding provided through an agreement between the Government and the European Union (EU), the new

facility is equipped with offices for Restorative Justice and Child Diversion services, as well as office space for the Custos and Centre Manager.

In his address at the ceremony, held at the centre’s Hagley Park Road location, Justice Minister, Hon. Delroy Chuck, said the facility will assist with the ongoing case backlog reduction strategy.

“It was important that we look at the reduction in backlog of cases in the courts and this is happening at a very significant speed,” he said.

The Minister pointed out that the Hagley Park Road complex will temporarily house the St. Andrew Justice Centre, and that another facility is to be built in Stony Hill at a cost of $160 million.

“We hope that can be opened in the next two years, but we needed to ensure that another justice centre was available (in the interim). When we move to Stony Hill we will reduce the service here, because there are many services to be offered by the Justice sector. We are hoping that all the parishes will have a justice centre,” he said.

Mr. Chuck noted that demolition work has already started for the construction of the Justice Centre in Stony Hill.

He said that work is ongoing for the establishment of the St. James Justice Centre, and that Justice Centres will also be opened in Hanover and Clarendon.

The Minister said the centres will be equipped to handle matters related to Restorative Justice and Child Diversion, as well as dispute resolution, among a wide range of other justice related issues.

“My goal is to have all 14 Parish Justice Centres operational by December 2020,” he added.

Minister Counsellor/Deputy Head of Mission, European Union Delegation to Jamaica, Fredrik Ekfeldt, commended the Justice Ministry for the initiative, emphasising that access to justice is a fundamental right.