Justices of the Peace Bill Passed in the Senate 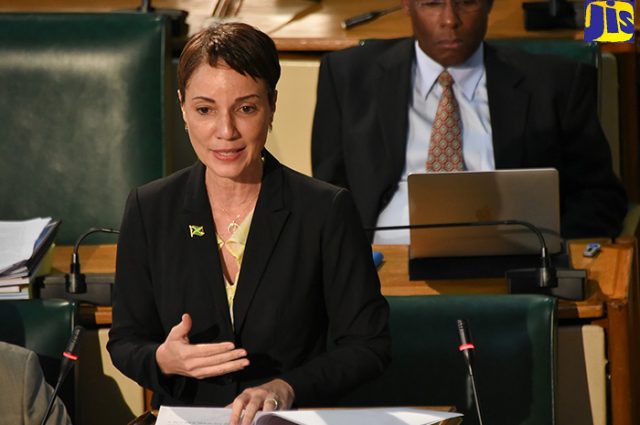 Minister of Foreign Affairs and Foreign Trade, and Leader of Government Business in the Upper House, Senator the Hon. Kamina Johnson Smith.

The Bill, which was passed with five amendments, is aimed at strengthening the regime governing the functions of JPs.

It provides for codifying the selection, appointment, discipline, regulation and code of conduct of JPs; and increasing the geographical and monetary jurisdiction of JPs.

Piloting the Bill, Minister of Foreign Affairs and Foreign Trade, Senator the Hon. Kamina Johnson Smith, said that despite the importance of the functions of JPs in the country, there is no legislation governing how they operate.

“For a number of years, there existed only a set of rules which…were crafted by the Custodes and in or around 2006, a Committee comprising the then Chief Justice, the Custodes, the Legal Reform Department and personnel from the Ministry of Justice crafted a Code of Conduct and incorporated the existing rules,” Mrs. Johnson Smith said.

Making note of the Justice of the Peace (Jurisdiction) Act of 1850, which is to be reviewed, the Senator pointed out that it only governs the judicial functions of JPs and does not affect the majority of issues covered under the current Bill.

Mrs. Johnson Smith said the Justices of the Peace Act will go a far way in “impressing upon the minds of not only the JPs, but all Jamaicans the seriousness of the Office of Justice of the Peace,” and would address certain matters pertaining to how JPs operate.

She noted for example, that “the rules are silent” on what should happen to a JP who has been criminally charged or convicted, in terms of whether his commission should be suspended or revoked.

“Can you imagine that a JP could be charged for fraud or even convicted and still be allowed to retain his seat? Clearly this deficit in the law must be arrested immediately,” she stressed.

The Senator said another issue is the perennial problem of JPs losing their seals through negligence, or carelessness, with the Government having to fork out 50 per cent of the replacement cost of the seal, and the JP only being required to pay 50 per cent.

“Statistics have shown that the majority of seals reported as stolen were stolen just simply being left in parked motor vehicles. The Government cannot continue to fund negligence…everyone must be responsible for instruments of office placed in their care and custody,” she said.

Mrs Johnson Smith said there is also the issue of whether it is proper for a JP to charge a fee for his services, noting that it has long been known that this should not be the case.

“It will now be entrenched in law…that a JP cannot and shall not charge for their services,” she said.

In the meantime, companion Bill, the Re-naming of the Courts of Petty Sessions (Miscellaneous Amendments) Act, 2018, was also approved by the Senate.

According to the Task Force, this would help to change the public’s perception of this Court, as, often times, Lay Magistrates (JPs) are not afforded the respect as other judicial officers, despite the serious nature of their role.

“So, it is for all the above reasons, and more, that the law must be refined and clarified to reflect the increasing significance of the Office of the Justice of the Peace to our society,” Mrs Johnson Smith said.

The Bill was passed with no amendments.