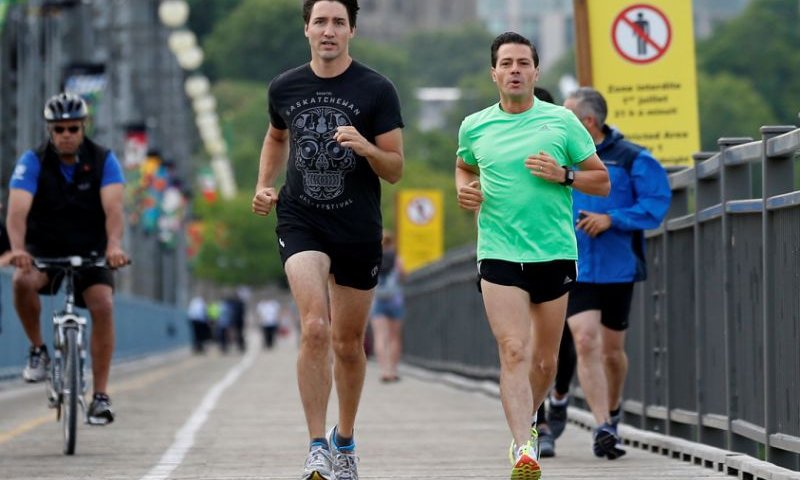 PM Trudeau seen jogging has sparked great interest with the sceptics wondering if it was staged. Whether staged or not this action should not be ignored. The significance should not be downplayed. Trudeau was at the G7 and he could have immersed himself in meetings and shut out time for exercise. He choose otherwise and should be commended.

My former Principal at Gaynstead High School always encouraged us to participate in sports. He even had a mini gym in his alcove where he lifted weights to keep fit. He told me the importance the Greeks placed on sports and a healthy lifestyle. As a very impressionable young man, as most youngsters are, this worthy practice of his has left an indelible imprint that is lasting on my mind some 40 years later. He also told us that “A healthy body creates a healthy mind.” I was head boy so I was expected to set a sound example. I played soccer and cricket. The Greeks started the first Olympics way back in 1894 in Athens, Greece. The idea was mooted from as early as 776 BC to AD 393.

Dr. The Christopher Tufton, Health Minister launched a “Jamaica Moves” and has been promoting a healthy lifestyle. He even changed the name of his Ministry to read “Health And Wellness.” The focus is on wellness and a healthy living. Leaders must lead by example. So Hon. Justin Trudeau PM of Canada is leading by example. We applaud his move.

It is our further perspective that we should not try to put down our leaders when they try to set admirable examples. Trudeau has done well and the world has noticed. He also led on the Amazon rainforest degradation. His lungs need the oxygen to breathe. A smoking Amazon is unhealthy for the world. What is your perspective? This is ours. Will Trump and Bolsonaro learn and follow Trudeau’s example? This is our perspective. Please feel free to disagree. We are sure US President Donald Trump and Boris Johnson is watching.