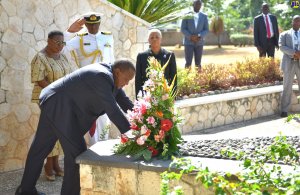 President of the Republic of Kenya, His Excellency Uhuru Kenyatta, places flowers at the Shrine of the country’s first National Hero, the Rt. Excellent Marcus Mosiah Garvey, at National Heroes Park, in Kingston, on August 6. Observing at left is Minister of Culture, Gender, Entertainment and Sport, Hon. Olivia Grange. The ceremony formed part of the itinerary of the President’s three-day State visit to the island. The President and Mrs. Margaret Kenyatta are special guests for the celebration of the 57th anniversary of Jamaica’s Independence. The President and Mrs. Kenyatta are scheduled to depart the island on Wednesday (August 7).