Guyana limits access to waterfall popular with tourists after suicides 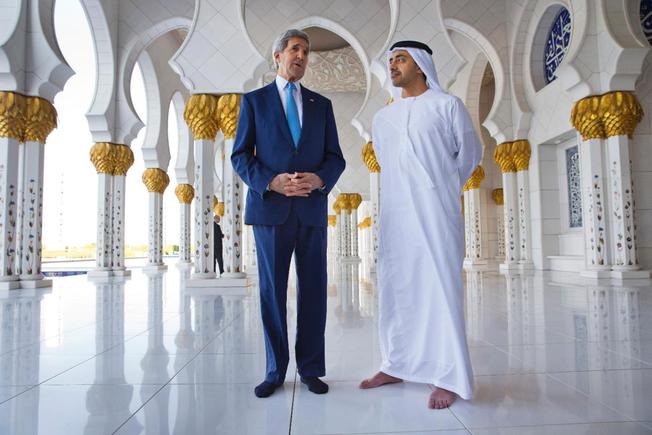 Kerry spoke between meetings with senior Arab officials in the United Arab Emirates, and as the Belgian capital of Brussels was in virtual lockdown over terror threats a continent away. President Barack Obama’s administration faces pressure at home and abroad to step up the fight against the Islamic State after its Nov. 13 attack in Paris killed 130 people. Obama meets French President Francois Hollande in Washington on Tuesday.

“The key is to destroy Daesh rapidly in Syria and in Iraq,” Kerry told reporters, using an alternative term for the Islamic State.

The chief American diplomat said Obama was asking everyone in the U.S. government for new concepts to speed up the fight. Some steps were in motion before the Paris attack, he said, such as the decision to deploy some U.S. special forces to Syria and ongoing efforts toward a cease-fire between Syria’s government and rebel groups.

But Kerry didn’t outline any specific post-Paris additions to the strategy.

He made no mention of any country authorizing a large-scale deployment of boots on the ground to Syria, as some Republican presidential candidates have suggested. And he dismissed the notion of a no-fly zone in Syria, proposed just last week by his predecessor as secretary of state, Democratic presidential candidate Hillary Rodham Clinton. He said it was “not a new idea.”

Kerry didn’t rule out greater co-operation with Russia, which Hollande is expected to ask Obama about. Obama and other U.S. official say Russia must first limit airstrikes to the Islamic State and other extremist groups, and not Western-backed, moderate forces.

If rebels see new co-operation with Russia as designed to keep Syrian President Bashar Assad in power, “that complicates issues, and then you will have greater support going to bad actors.”

“It has to be done in a way that manages the passions and the disappointment and the sacrifices and the anger that exists on the ground among people who have been fighting Assad for four years now,” Kerry said. “You have to do this in a way that actually brings them to the cease-fire.”

Separately, the U.S. military said it destroyed 283 tanker trucks used by IS militants to transport oil from producing fields in eastern Syria to smuggling points in an acceleration of attacks on one of the militants’ most important sources of income.

The attack by four A-10 attack planes and two AC-130 gunships was carried out Saturday at a site near Deir el-Zour and al-Hasakah but not made public until Monday. It followed a similar assault on Nov. 15 that destroyed 116 tanker trucks as part of a concerted campaign to cripple the militants’ oil revenues.

“We have to cut off this notion of success,” he said, by which IS “gets a cheapie: Someone who already is a terrorist does something in their name.”

Kerry was clearest in outlining his focus in the overall strategy: Getting Assad and moderate rebels into a political transition process.

A truce could be a couple of weeks away, he insisted, even if several matters remain unresolved. For one, the plan doesn’t say when Assad might leave power. And no agreement has been reached on which fighting forces, beyond IS and the al-Qaida-linked Nusra Front, would be barred from participating.

“You don’t want to categorize everybody automatically,” he said. “If you can talk to some people and bring them back from there, and they want to go be part of the political process, and they’re willing to observe a ceasefire and put down their weapons, and so forth, then maybe that’s an opening.”