Kim Kardashian had her life threatened by a teenager who was later chased down and punched by her fiancé Kanye West, it was alleged today. 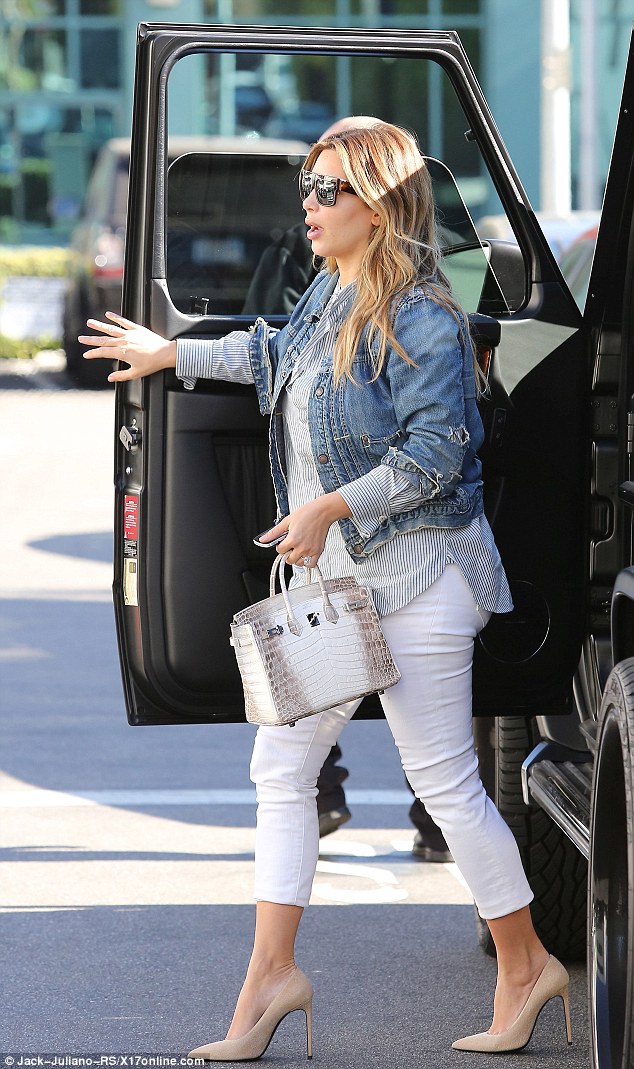 Kim Kardashian had her life threatened by a teenager who was later chased down and punched by her fiancé Kanye West, it was alleged today.

The reality star filed a police report against the unidentified 18-year-old who reportedly called her a ‘n***** lover’ and screamed ‘I will kill you s***’ in a wild rant in front of hoards of paparazzi.

The teenager was allegedly jumping up and down, screaming ‘n*****’ and ‘f*****’ at photographers when Kardashian arrived at a Beverly Hills furniture store on Monday. When she told him not to use the n-word, he turned on her, according to TMZ.

An 18-year-old, who has not been identified, is seen leaping up steps ahead of Kim Kardashian (circled right) at a furniture store before he allegedly threatened to kill her on Monday

Pictured: The 18-year-old man was allegedly assaulted by Kanye West after he is believed to have called the rapper’s fiancée Kim Kardashian a ‘n***** lover’ and threatened to kill her

The bizarre confrontation escalated when Kardashian called West, 36, during the incident.

The Yeezus star then roared up in his Lamborghini a few minutes later. ‘Witnesses say Kanye punched the guy and Kim screamed, ‘We have it all on tape’, according to TMZ.

Kardashian, 33, is filing a police report against the man for making criminal threats.

The 18-year-old has also told Beverly Hills police that he wants to press charges against West.

Law enforcement sources in LA have confirmed that Kanye is officially a suspect and that the matter has been referred to the County DA for possible prosecution.

Beverly Hills Police officers arrived on the scene but West and Kardashian had already left, the BHPD confirmed on Monday.

Ugly situation: The boy opened the door for the reality star, but he turned on her after she told him he shouldn’t use the N word

‘Kanye was named as a suspect by the victim as well as witnesses. He had left prior to our arrival, and detectives are currently investigating,’ Beverly Hills Police Sgt. George DeMarois told the New York Daily News.

‘The named suspect was identified as Kanye West by the victim and several witnesses,’ police said according to a Beverly Hills Police Department statement.

The BHPD are now conducting a follow-up investigation in regards to misdemeanor battery charges.

Representatives for West have not responded to a request for comment while a rep for Kardashian had no comment about the incident.

Kanye West is already facing charges battery and attempted grand theft after an altercation with a photographer at LAX last summer.

Photographer Daniel Ramos told police that he was taking pictures of Kanye when the suspect attacked him.

West’s lawyer, Blair Berk has entered a plea of not guilty on his client’s behalf and the case is scheduled to be heard on January 23.

Rob Wilcox, spokesman for the Los Angeles city attorney’s office, said each of the two charges carries a maximum sentence of six months in jail.

Kim had been seen getting out of her Mercedes-Benz G-wagon on Monday morning, wearing white slacks and beige high heels along with stripped button-down shirt and a denim jacket.

Kanye had been spotted at the same location in a Yeezus shirt and shiny black slacks with construction boots.

Photo agency x17online told MailOnline: ‘There was a row between Kanye and a guy over verbal treatment of Kim entering a building.

‘She arrived in her truck and Kanye arrived a little later in his Lamborghini,’ x17 added.

‘He went into the building and allegedly assaulted the guy who abused Kim and then left the building… he drove off in Kim’s truck. She later left and drove his Lamborghini home.’

For the original report go to http://www.dailymail.co.uk/news/article-2539292/Kanye-West-punch-victim-threatened-kill-Kim-Kardashian-caught-jumping-video.html