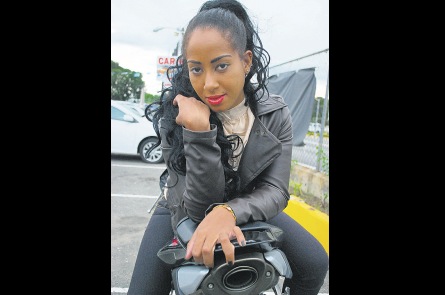 SINGER K’sangel hopes to kick off her career with Rebound, a soon-to-be-released seven-track EP which features a diverse mix of musical styles.

“I’m currently working on it with various producers across the island to create a blend of pop, R&B and dancehall with a little bit of reggae,” K’sangel, 24, told Jamaica Observer.

The EP, scheduled to drop next February, is the culmination of five years in the music industry.

K’sangel, whose given name is Sherene Salmon, said the decision to go with such a mixture of styles is based on her musical diet.

“I don’t think I’ve chosen that blend on purpose. It just reflects what I’ve been listening to from I got into music,” she said.

She firmly believes there is such a market for her sound and has been hard at work with Moby Records, Rural Area Productions, Panta Son, OD Records, Mhaadboxx Productions and Dean Fraser to make Rebound reflect her tastes.

“The studio work is the easy part. The hard part is getting airplay and hearing the public comments on social media sometimes,” she said.

Her first single, Can’t Take This, was released in September.

Hailing from Spanish Town, the former Dunoon Technical High student said music was “always in her blood” and was always writing songs. She explained how she came by her stage name.

“I used to babysit a lot, then one day my mother mentioned that kids were drawn to me like an angel, so I just combined the two,” she said.

Once the EP is released, she intends to cross over intothe mainstream.

“Ultimately, I want a Grammy and to inspire kids into taking up music,” she said.

For the original report go to http://www.jamaicaobserver.com/entertainment/K-sangel-on-the-Rebound_15646705