PERSPECTIVE: THE JAMAICAN DIASPORA SHOULD BE AWARE OF HOLNESS’S CARROT AND STICK DIPLOMACY

PERSPECTIVE: THE LACK OF A CONSTRUCTIVE AND STRATEGIC FOREIGN POLICY FOR SOME 3.0 MILLION JAMAICANS OVERSEAS IS STALLING JAMAICA’S ECONOMIC GROWTH AND DEVELOPMENT 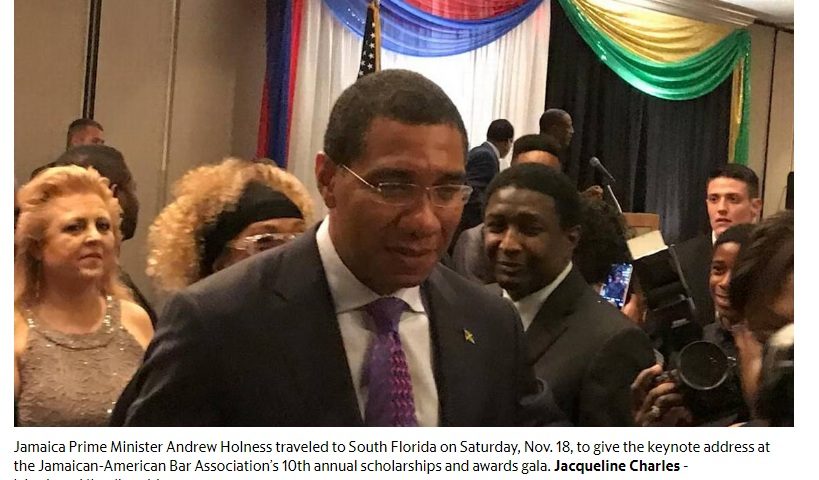 First, Holness bestowed upon a racist the President of Dominican Republic one of Jamaica’s Highest Awards. “More recently, the Dominican Republic, Ethiopia,’ and
Mauritania have implemented ethnically-based expulsion programs that in effect functioned as denationalization programs.”

Then Holness Traveled to Miami told Jamaicans that where they were born was not important…”To be Jamaican, he said, was less about
where one was born but more “a state of being.” This statement reflects the general confusion and lack of direction or interest in diaspora engagement beyond seeking investments. I do hope he understands the consequences of de-nationalizing every Jamaican
citizen living overseas as this appears to be the classic argument or let say narrative of the true intent of the JLP government while telling you they want your investments.

I do hope Mr Holness had gotten the message during his address to the Jamaican American Bar Association in Florida, when the night’s
biggest applause came when Holness said he favours changing Jamaica’s constitution to allow people living in the US and elsewhere to vote or run for office: “I think that would be a very progressive step in terms of Jamaica’s own development.”

This also signals that our advocacy for diaspora voting is having tremendous success. It is not building a shared interest with Jamaicans
overseas to suggest that a Constitutional Amendment was necessary to facilitate voting from overseas. That is not true. All the government needs to do is to issue a formal ministerial order to appropriate funds to facilitate electronic voter registration and
balloting on computers at consulates and embassies around the globe. Mr. Seaga, on the other hand, seems to contradict the Prime Minister by suggesting that the obstacles to Diaspora Voting is the current voter registration system and not the Constitution
as implied by Holness.

If the Prime Minister was referring to Section (40) of the Jamaican Consitution then the government should acknowledge that the current
interpretation to the document is flawed. The Jamaican Courts erred in applying a broad interpretation of section 40 of the Constitution regarding swearing of allegiance.

The government is, therefore, nuanced when it comes to the rigths of Jamaican citizens overseas. According to Dr. Peter Phillips, leader
of the opposition, “I believe it is also appropriate now that we have Jamaican immigration recognize the fact of dual nationality on the part of Jamaicans; most passports record where you were born. And when the Jamaican of dual nationality comes in they should
be recognized as being Jamaican and be treated as an accepted part of the Jamaican community.”

If foreign citizenship empowers Jamaicans, why the government is against the advancement of all Jamaicans overseas with punitive Immigration
laws? “National Security Minister Robert Montague has signed an order which will allow Jamaicans holding foreign passports to enter Jamaica and remain for six months without having to make arrangements for additional time to stay in the island.” especially,
If free flow of people and goods within the CARICOM states are good for the Jamaican economy why the same is not true for Jamaicans (Diaspora) living overseas in the UK, Canada, and the USA who contributes more to
the economy of Jamaica than all the CARICOM states combined?

Without the rights to vote the Jamaican diaspora would not have any recourse to protect its investments. Therefore, the diaspora vote
is the only way to protect your investments from unfair competition and the corrupt practices of the government. We must continue the advocacy for the rights of the Jamaicans overseas to vote and the progress we have made must continue to take shape in the
form of an independent movement.