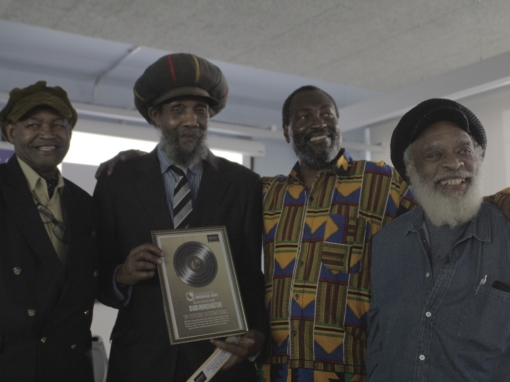 If you’ve never heard of the International Reggae Day (IRD) July 1 initiative, you are bound to hear about it a bit more from now on. Because last Saturday marked the first official IRD London event, and the feedback has been such that work has already begun to make July 1 2018 a key date in the capital’s calendar.

The inaugural event, which took place at University Of Westminster’s Marylebone campus, was organised by BritishBlackMusic.com/Black Music Congress (BBM/BMC). It included a film and discussion on Britain’s sound system history, a presentation on copyright and its role in the development of Jamaican music, a quiz, and highlights from a documentary that claims the London borough of Brent as the centre of Britain’s reggae history.

Veteran sound system man and record producer Lloyd Coxsone received an IRD2017 award for his long-standing work as the operator of the Sir Coxsone Outernational sound system. Fellow veterans record producer and manager Mikey Campbell and singer-songwriter Tony Washington, whose song ‘Something’s Gotta Be Done’, was the b-side to Millie’s 1964 UK and US crossover hit ‘My Boy Lollipop’, made the official presentation. BBM/BMC also acknowledged the late Daddy Vego, who operated the Ladbroke Grove-based Peoples Sound record shop and sound system. His son Far Adams was on hand to receive a token of appreciation.

As part of the ongoing British Black Music Month (BBMM) celebrations, the history of Ladbroke Grove and Notting Hill carnival will be examined at the Reggae History Quiz/’Grove Music’ screening and Q&A event at Harrow Mencap on Monday July 10.

Also, three BBM/BMC awards in recognition of Carroll Thompson, Janet Kay and Paul Dawkins, for promoting the UK’s reggae sub-genre known as lovers rock internationally and putting Brent on the musical map will be presented at the Brent Black Music History Quiz event at Brent Civic Centre on July 28.

IRD has been an annual event since it gained official recognition in Jamaica in 2000. It is marked across Jamaica and several cities internationally on July 1.

“Apart from the formal event, the conversations and networking continued for over two hours after the event officially ended, clearly demonstrating the need for such an event,” said BBM/BMC founder Kwaku.

“For those that didn’t know, they must now know that we’ll continue International Reggae Day London on July 1 2018. So if you’re interested, get involved now.”