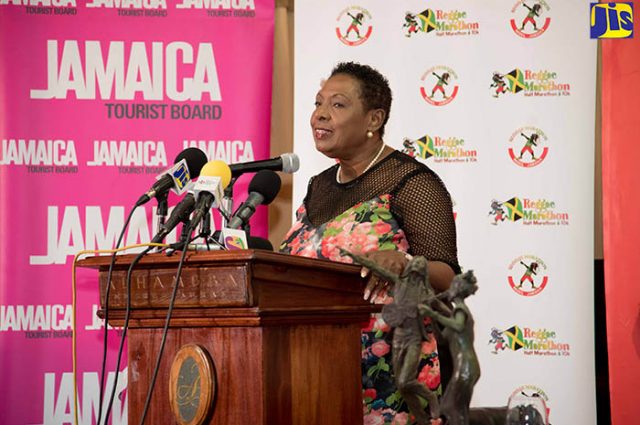 Minister of Culture, Gender, Entertainment and Sport, Hon. Olivia Grange, addresses the launch of the Reggae Marathon, Half Marathon and 10K at Alhambra Inn in St. Andrew on Tuesday, October 24

She was speaking at the launch of the 2017 Reggae Marathon, Half Marathon and 10K event held at the Alhambra Inn in St. Andrew on Tuesday, October 24.

The projects, being undertaken as part of the year-long ‘Jamaica 55’ Independence celebrations, include establishment of a Caribbean Sports Medicine Centre on the Mona Campus of the University of the West Indies (UWI); a virtual sports museum, which will trace and showcase Jamaica’s performance in sports; and establishment of a physical sports museum at the Independence Park Complex at the National Stadium.

In addition, the Trelawny Stadium is to be redeveloped to become the centre of sport tourism; and mini stadia will be created at the Goodyear Oval in St. Thomas; Drax Hall, St. Ann; Portmore, St. Catherine; and the Herb McKenley Stadium in Clarendon.

“It is exciting times for sport tourism,” Minister Grange said.

“My Ministry has a major role to play in Jamaica capitalising to the fullest extent on this positive trend in the world in sport tourism. This nation has been blessed with athletes, coaches and other support personnel of the highest order. It behooves us, therefore, as Government, to provide the support through infrastructure and other facilities to enable us to turn potential into money; big money,” she noted.

“Our objectives through these projects are to invest in the sport industry, which has significant potential in sport tourism, to generate significant tourism and income-earning benefits for Jamaica, to improve infrastructure in rural Jamaica and to promote active living in Jamaica,” she added.

Ms. Grange said tourism is the world’s number-one industry, with sport regarded as the top industry in the leisure sector.

“Sport is an integral part of our culture, and while often viewed as a separate activity, it is inextricably linked to tourism. Sport can now be viewed as an attraction within the broader tourism industry,” she pointed out.