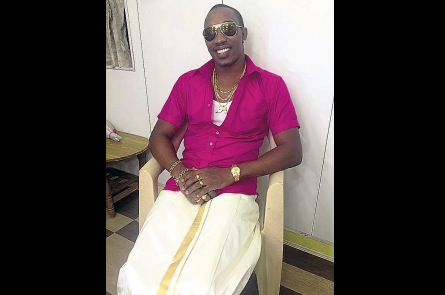 The thriller was filmed in Chennai, the capital of the Indian state of Tamil Nadu

Bravo’s agent, Emma Everett, in an email response to questions from the Jamaica Observer, said the Trinidadian allrounder was cast in a song and dance sequence. Bravo plays for the Chennai Super Kings team in the popular Indian Premier League.

Ula is directed by Indian film-maker and screenwriter Rajan Madhav. Scheduled for a December release, the movie features an impressive cast of Bollywood stars including Ajmal, Viddharth, Ashok, Radhika Apte and Gayathrie.

Everett says Bravo is excited at the opportunity to appear in a Bollywood film. Several cricketers from the sub-continent have had feature roles in these made-in-India movies which have made the movie industry in that country one of the most lucrative in the world.

“He is thrilled as entertaining is what he loves to do. The Indian film industry is the biggest in the world, so he is aware of its commercial importance in terms of future opportunities. He is very much considering the prospect of further roles,” she explained.

During a recent London press conference announcing his role in Ula, Bravo told reporters that “India is like my second home now, so I was thrilled when my agent presented the opportunity to me and moreso, when she mentioned it was going to be filmed in Chennai, a city to which I obviously have a deep affiliation as a member of the IPL team, Chennai Super Kings. I love the people of Chennai and the people of India, and I am relishing the opportunity to work with a talented and highly respected cast and crew in my first film.”

It is not Bravo’s first venture in the entertainment industry. He has collaborated with dancehall deejay Beenie Man and Guyanese singer Timeka Marshall on songs for his record label.

The 30-year-old Bravo is a cousin and protege of former Trinidad and West Indian batsman Brian Lara. He has played 30 Test matches for the regional team since his debut against England in July 2004.

For the original report go to http://www.jamaicaobserver.com/entertainment/LIGHTS–CAMERA–BRAVO–_15224538