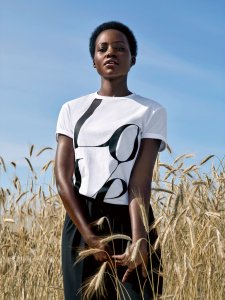 “I am proud to support Watch Hunger Stop because it focuses attention on solutions to the problem of hunger and encourages people to take action on an individual basis,” says Lupita Nyong‘o, explaining her decision to join forces with Michael Kors.

“Watch Hunger Stop helps to fund meals for schools, which has a direct impact on leveling the performance playing field for underprivileged students,” Nyong’o adds. “When students can eat, they can perform better in school which in turn leads to greater opportunities in life. In so doing, Michael Kors and WFP are facilitating better opportunities for women and girls on a daily basis.”

The talented Nyong’o, whose extraordinary career includes a Tony-nominated Broadway debut in Eclipsed, her role as Patsey in the film 12 Years A Slave, for which she won an Oscar, and roles in films Black Panther, Queen of Katwe, and Star Wars: The Force Awakens, among others, is in the midst of a whirlwind year. In addition to her roles in Us and the zombie comedy Little Monsters, she has a children’s book, Sulwe, that Simon & Schuster will publish on October 15th. Nyong’o and Danai Gurira’s planned adaptation of the novel “Americanah” has received a straight-to-series order at HBO Max, as a limited 10-episode series. Nyong’o will star in the series, with Gurira writing the pilot and serving as showrunner. Despite the many demands on her time, Nyong’o believes in using her talent and influence to support causes that are important to her. She is an engaged advocate for women and girls and an avid supporter of wildlife conservation, serving as Global Elephant Ambassador for the international conservation organization WildAid.

“Lupita is smart, talented, compassionate and strong, with an extraordinary ability to inspire others,” says Michael Kors. “I’m thrilled that she has joined us in the fight against hunger. Her empathy, honesty and commitment will make her a powerful force for change in the effort to build a world with zero hunger.”

The theme of this year’s Watch Hunger Stop campaign is FOOD IS LOVE, words that Kors often uses when talking about why he was drawn to the issue. To help feed a child is to care for them, to share their hopes and dreams, to support them as they make their way in the world. School meals provide children in food-insecure regions with the nutrition they need to grow and to thrive. They also provide an incentive for families to send their children, especially girls, to school.

Each October, to mark World Food Day on October 16, Michael Kors offers special-edition products specially designed to raise funds for WFP. This year, the products are a t-shirt and a tote featuring the word LOVE. Simple and striking, the LOVE t-shirt and tote will be available for purchase online and in select Michael Kors lifestyle stores around the world beginning October 1. And to make a good thing better, Michael Kors will donate 100 additional meals to WFP if customers “wear it and share it” by snapping a selfie while wearing their Watch Hunger Stop LOVE t-shirt or tote and posting it online with the hashtag #watchhungerstop.* The unisex t-shirt, offered in black and white, will retail for $40. The black canvas tote, with leather handles, will sell for $59. For every LOVE t-shirt or tote sold, Michael Kors will donate all profits to children in need through the World Food Programme.*

During the month of October, customers can make a donation directly to WFP at the register in select Michael Kors stores around the globe. Just $5 feeds a child in school for a month.

In select countries, visitors to WatchHungerStop.com can follow the on-screen link to donate to WFP directly.

“Food is a simple, essential need, but solutions to hunger need to be thoughtful,” said Michael Kors. “We’ve supported WFP’s school meals programs over the years because they focus on making communities stronger and more self-sufficient. They also understand how important it is to provide opportunities for women and girls to break the cycle of poverty. We’re proud to work together with them toward zero hunger.”

About Watch Hunger StopWatch Hunger Stop, established in 2013, raises funds and awareness to help achieve a world with Zero Hunger. The brand’s partner in the effort is the United Nations World Food Programme (WFP), and funds go to support WFP’s school meals program. In 2015, Michael Kors was named a WFP Goodwill Ambassador; in 2016, he was awarded the McGovern-Dole Leadership Award by WFP USA for his dedicated efforts to highlight and alleviate the crisis of hunger.

About Michael Kors Michael Kors is a world-renowned, award-winning designer of luxury accessories and ready-to-wear. His namesake company, established in 1981, currently produces a range of products under Michael Kors Collection, MICHAEL Michael Kors and Michael Kors Mens, including accessories, ready-to-wear, footwear, wearable technology, watches, and a full line of fragrance products. Michael Kors stores are operated in the most prestigious cities in the world. In addition, Michael Kors operates digital flagships across North America, Europe and Asia, offering customers a seamless omni-channel experience.

About the World Food ProgrammeThe United Nations World Food Programme—saving lives in emergencies and changing lives for millions through sustainable development. WFP works in more than 80 countries around the world, feeding people caught in conflict and disasters, and laying the foundations for a better future.