Winfrey on ‘Selma’ and the Oscars: Public response means the film has ‘already won 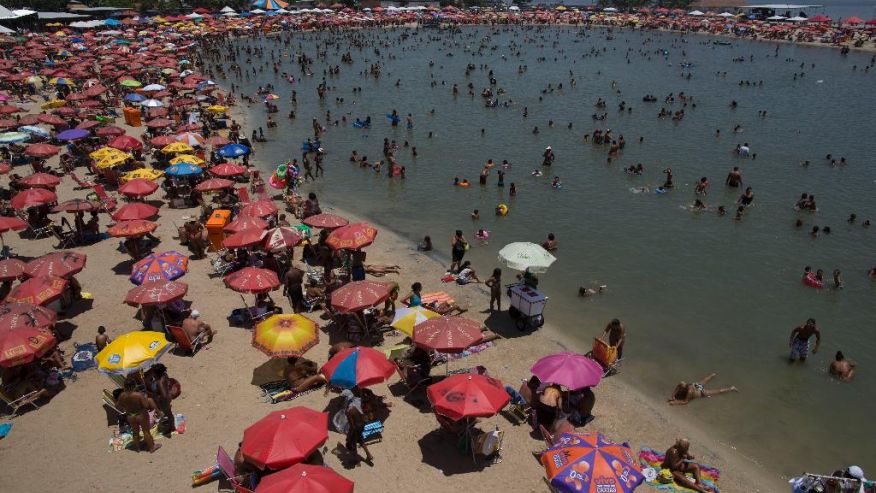 RIO DE JANEIRO _ Bianca D’Aquino adjusts her parasol to block the blazing sun and settles into her beach chair, sinking her painted toenails deep into the burning sand.

The 19-year-old used to travel hours to Rio de Janeiro’s chic Ipanema beach, but a spate of mass robberies by groups of youths are keeping D’Aquino closer to home, on an artificial shoreline built on the banks of trash-strewn and polluted Guanabara Bay.

D’Aquino, who hails from one of the hardscrabble neighbourhoods that ring Rio’s beachfront districts, is among people who are seeking alternatives for their beach time because of the mass robberies known in Portuguese as “arrastoes,” or “dragnets.” In the attacks, groups of youths run through a beach crowd, sparking panic and grabbing cellphones, necklaces and other valuables as sun bathers run frantically.

They’ve erupted at the height of the tourist season and just 1 1/2 years before Rio plays host to the 2016 summer Olympics. The police have responded swiftly, erecting beachfront roadblocks that allow officers to stop buses travelling from poor neighbourhoods and randomly frisk passengers _ nearly always young black men and boys.

The roadblocks have raised allegations of racial profiling and sparked uncomfortable questions about a point of national pride: the democratic nature of Brazil’s beaches. Unlike some of the United States and parts of Europe, all Brazilian beaches are public and regarded as places where different classes can mingle.

D’Aquino said she prefers to avoid potential violence at Ipanema, Copacabana and other rich coastal areas, and the looks of suspicion she gets as a young, mixed-race woman from a poor neighbourhood. So, on sunny weekends during the Southern Hemisphere summer, she now heads to the artificial beach, known as the “Piscinao de Ramos,” or “Ramos’ Big Pool,” after the neighbourhood where it’s located.

“In Ipanema, I’m constantly on edge, worried if I’m going to get robbed or going to have to take off running at any moment,” D’Aquino said from a rented beach chair one recent Sunday. “Here, I can leave my bag, leave my cellphone and come back an hour later and nobody’s touched it. The water might be a little dirty here, but at least I feel safe.”

Rio police are struggling to restore a similar sense of security to Ipanema, Arpoador and Copacabana beaches, which have been thronged by tens of thousands of bathers every weekend during a mid-summer heat wave. Police have deployed around 800 officers to patrol the beaches during the weekends, along with helicopters and a mobile surveillance unit bought to provide security during last year’s World Cup soccer tournament.

Police average between 100 and 150 beachside detentions per weekend, said Col. Frederico Caldas, a spokesman for Rio’s military police. But because most of those detained are minors, Brazilian law requires they be released swiftly.

“Police are not told to enter on a bus to do a search focusing on young people or on black people or poor people,” Caldas said. “They’re going to look for objective criteria,” such as suspicious behaviour.

“The beach is a Brazilian national treasure. Especially in Rio de Janeiro, the beach represents an important space, a democratic space in our culture,” he said. “We’re going to do everything possible to bring tranquility to our coastline so people can enjoy the beach.”

Roadblocks, he said, are “the price of security in any country.”

Jorge Luis, a 56-year-old sunning on Ramos beach, rejected that.

“They say it’s not racism but of course it is,” he said. “Is it just by chance that all the people they pull off (the buses) are black?”

Others say the roadblocks don’t go far enough toward protecting Rio’s beaches in the wealthy South Zone where Olympic tourists will flock.

Luiz Carlos Vieira, a 60-year-old businessman, said he rarely sets foot on the sand anymore even though he lives near Ipanema in one of the Western Hemisphere’s most expensive neighbourhoods.

“No one from the neighbourhood comes to the beach anymore. You can’t. It’s completely unviable,” he said. “We pay extremely high property taxes but with the insecurity on the beach, we’ve become hostages in our own homes.”