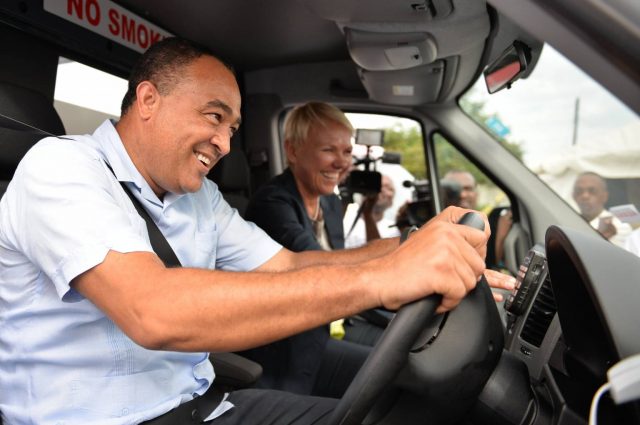 Photo: Health Minister, Dr. the Hon. Christopher Tufton, tries out one of the six ambulances provided to the health sector by the European Union (EU), during a ceremony at the May Pen Hospital in Denbigh, Clarendon on April 20. Sharing the moment is Head of Delegation, EU to Jamaica, Ambassador Malgorzata Wasilewska.

Patients at the May Pen Hospital, in Clarendon, will benefit from the establishment of an Erin Radiology Centre as of May 1.

Making the announcement, Transport and Mining Minister, and Central Clarendon Member of Parliament, Hon. Mike Henry, said the centre’s establishment will not cost the Government.

“It will provide (among other services) magnetic resonance imaging (MRI) service…the only one of its kind in the area, and this is an important element of development for the people of May Pen,” he said.

Mr. Henry was speaking at the handing over ceremony of six 2016 Mercedes Benz ambulances at the May Pen Hospital in Denbigh, Clarendon, on April 20.

The ambulances were provided by the European Union (EU) under the Programme for the Reduction of Maternal and Child Mortality (PROMAC), at a cost of €631,162 or approximately J$83 million.

Other developments to be undertaken at the May Pen Hospital, Mr. Henry noted, include the establishment of an area for research and development, “that will attract money,” and a private wing to support other areas of the hospital.