Photo of Prince Harry and Megan Markle on the Oprah Exclusive Interview. 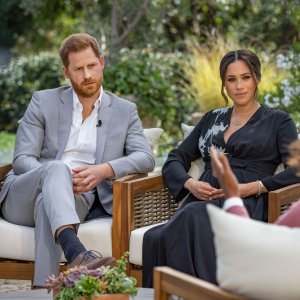 Photo of Prince Harry and Megan Markle on the Oprah Exclusive Interview.

Reports that Duchess Meghan Markle and her husband Harry now breaking ties at an official level with the Royal Tradition have also spoken out.  In this bombshell interview with Oprah Winfrey we have gotten a real insight into a secret society aka the Royal Household or Tradition.  It was a no holds barred interview. This interview again has given us a rare front seat into a rather secretive society. Members of that elite community dare not and therefore never speak out.  So very little is known because it is not spoken about publicly.  We are extremely indebted to the Duchess for allowing us to be so richly educated. Congrats!

As if that was not all, the former  active working Duchess dropped this bombshell to the queen of media Oprah Winfrey. We quote  Meghan’s comments inter alia:

“I contemplated suicide as my easy way out, my life was lonely and I felt isolated. There was no one to turn to in the royal household.  I told my husband that I contemplated taking my own life. Also conversations with those whom I spoke in royal circles said that is how it is and that I should bear it.” Meghan Markle speaking her mind.

Then it was Harry’s turn to speak his mind that he did. We quote what he had to say inter alia:

“My father refused to take my calls.  Himself and my brothers are trapped in the royal circle.”. My relationship with my brother William is strained, I hope it will improve.”

The full interview is being quoted across the world in various media sources.  We bring you this video for your perusal.

Mental breakdown is nothing to be ashamed of. Many deal with stress differently.  Mental health needs to be attended to as if any other illness. There is the aged old stigma as it relates to mental disorder.  Let us treat mental disorder promptly before it gets chronic.  Mental illness is indeed treatable. In most cases without hospitalization. You may stay at home or in the community. You may even be at work while being treated.  The method of treatment has been modernized. There is a new and more enlightened approach at mental illness. This does not mean that someone who is mentally ill is crazy. Treatment is key. Left untreated can lead to deterioration and mental breakdown totally. Meghan can and will be treated and will recover and return to her normal life.

President Joe Biden through a spokesperson has said inter alia:

” Meghan must be commended for speaking publicly about her mental health.”

This is the first high level international response to Meghan’s interview with Orpah Winfrey which has been widely commented on.

We see problems of family life even in more affluent sections of many societies.  The Royals have it all yet their family life is not insulated from being accident prone.  Can you imagine Meghan contemplating suicide? This accentuates clearly the level of dysfunctionality that has led her to feel so frustrated and hopeless as it relates to her feelings of hurt and neglect.

Racism, we are told, can lead to indelible mental scars. Is this what Meghan is suffering from? Possibly a feeling of less self-worth.

Hopeton O’Connor-Dennie is a veteran journalist who has a keen interest in injustice, racism and health issues. He has international exposure.