MPP updates over 100 attendees on his province-wide listening tour

“We need to build a new, modern party,” Coteau said, “We need a party that’s based on its grassroots, that’s digitally focused, driven to be accountable internally and effective at winning elections.” 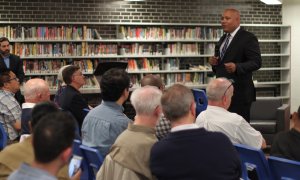 Coteau spoke as well to what he heard across the province in over one hundred different meetings and online interactions with some 19,000 local members, saying, “I truly believe that only by first building a good party can we earn the chance to form a good government. The people want to see that we’ve changed and improved our party. They do want us to earn their trust.”

“Everyone has a Liberal story of why and how we joined this party,” Coteau said. “For me, it was because of where I grew up—a working-class neighbourhood, as a black immigrant kid, whose family did not have a lot of money. I remember being 17, and wanting to improve my community. I didn’t know where to start, so I went to the library to learn about government.  I read about the parties and their values, and the Liberal story and ethos of multiculturalism, inclusion and working together to provide for the collective—this resonated with me. It spoke to my values. I’ve been a Liberal ever since—president of my campus club, a school trustee, MPP and cabinet minister.”

“We have a unique chance to build a new party from the wreckage of last year’s election result. We owe it to the province—to the country—to build anew this great, 200-year old national institution,” he concluded.

In April, Coteau released a discussion paper on party renewal, entitled “As We Build”, which outlines over three dozen ideas for party reform. He has been on a grassroots listening tour of the province for the past few months as he gears up for the forthcoming leadership race.