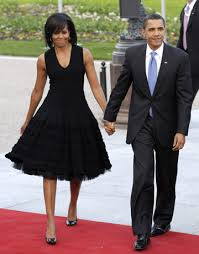 WASHINGTON _ So what will Michelle Obama turn out for? Turns out it’s a turnip.

Video of the first lady dancing with a turnip has gone viral after the White House put it on her Twitter feed late Tuesday.

Mrs. Obama had participated earlier that day in a social media Q&A on Vine, where people post videos that last mere seconds.

“Here’s a question for the first lady. On average, how many calories do you burn every time you ‘turn up’?” was the question posed by a Barack Obama impersonator, Iman Crosson, who goes by the Twitter handle “Alphacat.”

The first lady, in her response, holds up the starchy, root vegetable and says, “Turn up? For what?” before beginning to bob her head and groove in her seat to the catchy beat from “Turn Down for What,” by DJ Snake and Lil John.

The hit song also was spoofed by the political group Rock the Vote in “Turn Out for What,” a video encouraging young adults to vote in the Nov. 4 midterms.

Mrs. Obama answered questions Tuesday before she joined schoolchildren from across the country for the fall harvest of vegetables from her garden on the South Lawn.