The 901 – Room RIU Ocho Rios property is now one of the largest hotels in Jamaica.

Tourism Minister, Hon. Edmund Bartlett, has hailed the owners of the Spanish hotel chain, RIU Resorts, for the growing expansion and continued investment in Jamaica.

RIU has pumped over J$11 billion (US$85 million) into the renovation of its Ocho Rios property in St. Ann, including the building of a state-of-the-art water park, making the hotel chain one of the largest in Jamaica.

The hotel, located in Mammee Bay, closed its doors in April to facilitate the renovation, reopening in September.

The project, which also included the addition of 45 new rooms and expansion of restaurants, provided jobs for some 150 new employees. 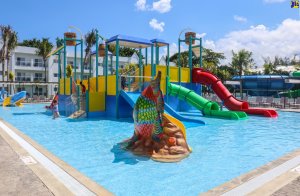 “We cannot lose sight of what RIU has been doing,” Minister Bartlett said in an interview with JIS News.

“Not only does Jamaica have the most RIU hotels in the English-speaking Caribbean, with six, but also having close to 2,800 workers in all the hotels combined is saying quite a lot,” he noted.

Mr. Bartlett said he was impressed with the speed with which the renovation was completed, noting that a lot of Jamaicans benefited “and will continue to benefit.”

The Tourism Minister added that the fact that so many Jamaicans continue to gain valuable employment at the RIU properties speaks volume to the chain’s commitment to the country and the kind of “belief they have in the work ethic of our people.”

Mayor of St. Ann’s Bay, Michael Belnavis, for his part, said that having a hotel the size of RIU in Ocho Rios is a major boost for the resort town.

He noted that with a staff complement of nearly 800 workers, there are a lot of spin-off benefits for communities and the parish in general.

“Whenever you have so many local workers at a hotel, you can accurately say that a lot of families and communities have indirect benefits coming their way,” he said.

Mr. Belnavis added that coming out of discussions with the senior management at RIU, he is confident that the hotel chain is “here to stay,” with the possibility of even more investments.

Meanwhile, RIU Ocho Rios General Manager, Javier Huretas, told JIS News that “everyone was astonished at how fast we reopened the property but that has always been the RIU way.”
“The billions of Jamaican dollars we have invested would equate to building a new property…not just to renovate. We, however, believe strongly in our product and will continue to invest in Jamaica,” he noted.

For her part, RIU’s Director of Sales in Jamaica, Niurka Garcia-Linton, said RIU Ocho Rios now has a total of 901 rooms, making it one of the top two hotels in St. Ann in terms of room count and certainly one of the biggest in the country.

She noted that the property has taken on the family-oriented concept and so the construction of a new state-of-the-art water park “made a lot of sense.”

“The construction of a water park is one of those added attractions that is bound to attract families from all over. This is an investment that is worth every penny of what we spent,” she said.