Minister Grange Urges Jamaicans to Stand up Against Gender-Based Violence 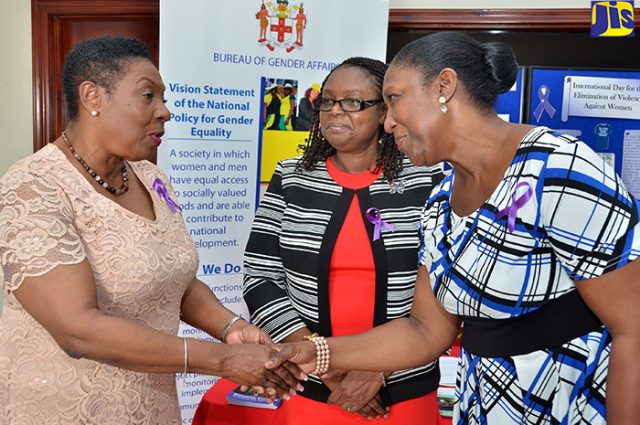 Minister of Culture, Gender, Entertainment and Sport, Hon. Olivia Grange (left) exchanges pleasantries with Director, Policy and Research, Bureau of Gender Affairs, Sharon Coburn (right), before the start of the service in observance of International Day for the Elimination of Violence Against Women, held on Saturday (Nov. 25) at the Hagley Park Seventh-day Adventist Church in Kingston. At centre is Director, Jamaica Union Conference of Seventh-day Adventists, Dr. Lorraine Vernal.

Minister of Culture, Gender, Entertainment and Sport, Hon. Olivia Grange, says it is time for Jamaicans stand up against gender-based violence.

“When we take a stand against violence and offer no comfort to perpetrators; when we expose them, when we stop turning a blind eye to the gender-violence that we know goes on next door, when we create a culture that promotes a harmonious world in which men and women live together with gender equality, when we are serious about stopping it, the violence will end,” she said.

Minister Grange was speaking at a church service in observance of International Day for the Elimination of Violence Against Women held on Saturday (November 25) at the Hagley Park Seventh-day Adventist Church, Kingston.

The service, under the theme: ‘Leave No One behind: End Violence Against Women and Girls,’ was organised by the Bureau of Gender Affairs, an agency of the Ministry in collaboration with the Jamaica Union Conference of Seventh-day Adventists.

Minister Grange cited police statistics between January 2016 and February 2017, which showed that 150 women were murdered; 263 shot; and 530 were raped. In addition, 511 girls under the age of 16 reported sexual violations and 370 experienced other forms of violations.

“Jamaica we have to do better than this,” Minister Grange said.

Minister Grange noted that this year’s observance of International Day for the Elimination of Violence Against Women comes at the height of the #MeToo movement, which encourages victims of sexual harassment and assault to use social media to tell their experience and stand in solidarity with other victims.

Noting that Jamaica has been calling for an end to the silence around gender-based violence, Minister Grange said that the campaign offers an important platform for victims, who have suffered for years in silence, to confront their attackers, to heal and to receive closure.

“MeToo is a revolution, a wake-up call and a turning point for the whole world. It has made clear the insidiousness and prevalence of sexual harassment and assault,” she said.

“It has helped to put faces to the ugly statistic that one out of every three women will become a victim of violence, which means that there are likely to be victims here with us this morning. And certainly, we each know at least one woman or girl who has suffered or is suffering the violence,” she pointed out