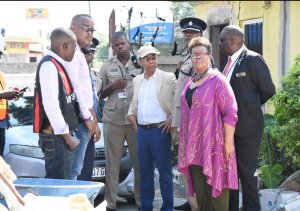 Minister of National Security, Hon. Dr. Horace Chang, is assuring the nation that the security forces are unwavering in their efforts to nab gang members and dismantle their activities.

Speaking to reporters at the Old Harbour Police Station in St. Catherine on February 24, after touring stations in the parish, the Minister said that with the recent conviction of a major gang leader from the parish, and another one set for trial in the Court, and scores of their members in custody, it is a clear indication that their control and influence on communities are steadily being weakened.

“We have convicted four brutal killers, and you have 50 members of one of the major gangs taken to court. The police officers have taken in nearly 60 bad gangsters. They are doing the work, and they are not going to let up,” Dr. Chang said.

He pointed out that the dismantling of criminal gangs is at the top of the Government’s crime reduction strategy, as gangsters are responsible for most of the murders on the island as well as other major criminal activities. 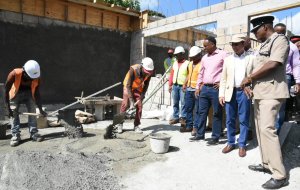 “We are going to increase the pressure on them, I can assure the country on that. It is a priority for the Government, which is why we are spending the resources on it. The first priority is to disrupt the gangs, and save lives,” the Minister said.

Dr. Chang further noted that the Government will be amending the Anti-Gang Act in a short while, to give the police “additional tools”, so that members of criminal gangs can face other penalties for their actions.

“And, we are putting in efforts in the medium term to divert our young males, especially in our inner-city communities, to give them an alternative to gang life,” the Minister said.

Dr. Chang, personnel from the Ministry, and senior officers from the Jamaica Constabulary Force (JCF) visited the Bog Walk and Old Harbour police stations to view rehabilitation works at both facilities.

The Minister also told the journalists that improvement in communication and mobility will be undertaken at the stations, while upgrading of the Old Harbour Bay police station is being considered.