Gov’t Committed to Efficient Use of Taxpayers’ Dollars 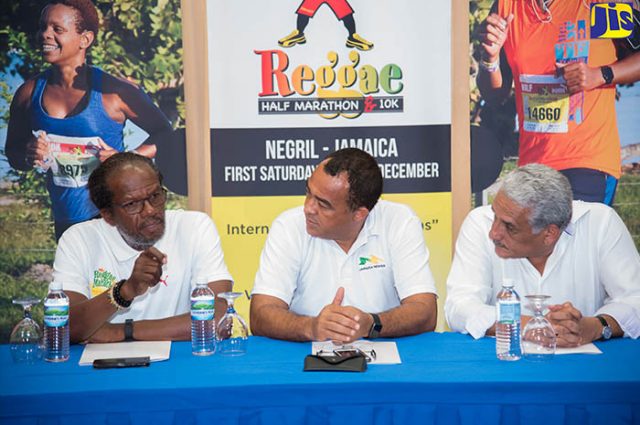 Minister of Health, Dr. the Hon. Christopher Tufton, and Culture, Gender, Entertainment and Sport Minister, Hon. Olivia Grange, have applauded the Reggae Marathon, Half Marathon and 10K events for their significant contribution to sports tourism in Jamaica within the last 16 years.

Speaking at the launch of the 17th staging of the events at Alhambra Inn in Kingston on October 24, both Ministers gave their commitment to continue supporting the annual races, to be run in Negril on Saturday, December 2.

Minister Grange said the support is important, as racing has become one of the major engines driving sport tourism in Jamaica.

“This is part of the worldwide trend, which, in recent years, has seen tourism generated by marathons rising in tandem with the increasing global popularity of marathon racing,” she noted.

She added that the Reggae Marathon was included in a group of events nominated by the Women’s Running and Men’s Running magazine publications in the United Kingdom, for ‘International Race of the Year’ in 2016, which is commendable.

“More and more, the signs point to the Reggae Marathon becoming as great a contributor to tourism as it is to the sport of marathon racing itself worldwide, which leads me to emphasise that sport tourism, in general, has become a multimillion-dollar industry,” the Minister said.

For his part, Dr. Tufton said he is pleased to partner with Reggae Marathon, Half Marathon and 10K, where the ‘Jamaica Moves’ initiative will be concluded.

“This is indeed a signature event for Jamaica, for the sports calendar and, indeed, with the participating countries overseas. It is not just a Jamaican event, it is truly an international event, [which is] recognised with quality. Reggae Marathon is an important event. It is so well known, it benefits not just the local community, but it projects and sells Jamaica as a destination that one can engage in this kind of activity,” he said.

Dr. Tufton noted that when the Ministry of Health approached the Race Director, Reggae Marathon, Alfred ‘Frano’ Francis, to partner for the Jamaica moves initiative, he and his team did not hesitate.

“He never thought twice about it. He and his team embraced it, and that’s commendable because not everybody is going to want to do that. As it turns out, Jamaica Moves is gaining traction and acceptance by virtue of the partnerships that we have forged,” he said.

This mostly flat course is an International Association of Athletics Federations (IAAF)-certified marathon, half marathon and 10K course. Registration has been opened since January 2, and a number of runners from 18 countries have already signed up for the races.