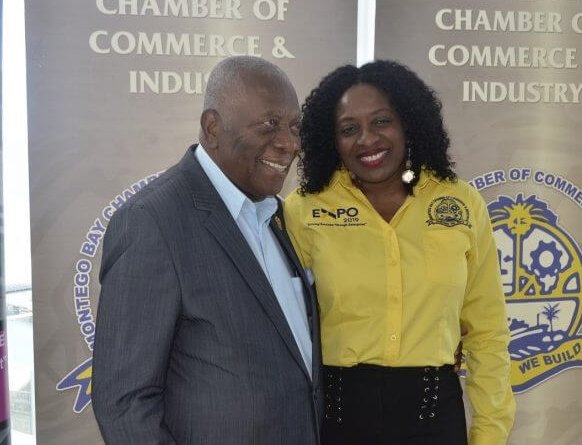 The Montego Bay Chamber of Commerce and Industry (MBCCI) has welcomed the Government’s decision to extend the State of Public Emergency (SOE) in St. James.

The House of Representatives, on Tuesday (July 23), approved a 90-day extension of SOEs in St. James, Westmoreland, and Hanover until October 28, citing a reduction in murders and shootings in the parishes between April 30 and July 21.

“We are okay with the extension. We {members of the MBCCI) went to a meeting… last week with a number of stakeholders, which was chaired by the Custos of St. James [Hon. Bishop Conrad Pitkin], where we agreed that we would [support] an extension of up to three months,” she explained.

She was speaking at the launch of the Chamber’s Expo 2019 at the S Hotel on Jimmy Cliff Boulevard in Montego Bay on Wednesday (July 24).

Ms. Silvera emphasised that it will take a collective effort to reduce crime and violence in St. James and, by extension, Jamaica.

Against this background, she urged the public to cooperate with the security forces in their crime-fighting efforts.

“The Chambers of Commerce, the Private Sector Organisation of Jamaica (PSOJ), the Jamaica Manufacturers and Exporters’ Association (JMEA), Jamaica Chamber Of Commerce… [and] wider community… all of us need to come together and find solutions to crime,” Ms. Silvera added.

Meanwhile, Chairman of the Tourism Enhancement Fund (TEF), Godfrey Dyer, indicated that the SOE should stay in St. James until “crime is brought down to the tolerable level”.

“This is going to take time, probably a year or more. Let us not let go of what we have that can curb it (crime),” he noted.

The 18th MBCCI Expo will be held at the Montego Bay Convention Centre from September 20 to 22 under the theme ‘Driving Success through Enterprise’.

The event will showcase the stakeholder participants’ goods and services and provide a medium for networking.