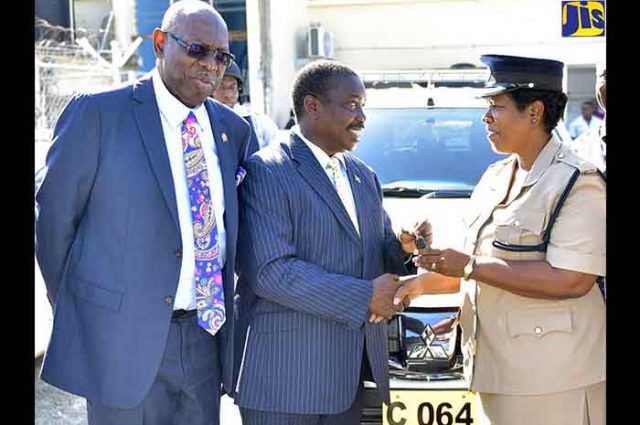 National Security Minister, Hon. Robert Montague (centre), hands over the key to one of six vehicles to Commanding Officer for the St. Thomas Division of the Jamaica Constabulary Force (JCF), Superintendent, Marlene Wilson Christie (right). The presentation was made during a ceremony at the Morant Bay Police Station on Tuesday (January 30). At left is Member of Parliament for Eastern St Thomas, Dr. Fenton Ferguson.

National Security Minister, Hon. Robert Montague, says he has made a submission to Cabinet to increase the sum available in the Legal Defence Fund for police officers.

The facility was established to assist the police with covering legal expenses.

Mr. Montague emphasised the need to boost the facility, noting that while the fund has $20 million, “the first bill (that) I got was for $107 million”.

He said he is optimistic that Cabinet will give favourable consideration to the submission in order to pay the legal bills of police officers, who are deemed to have committed infractions while on duty.

The Minister was speaking at a ceremony for the presentation of six motor vehicles to the St. Thomas Division of the JCF at the Morant Bay Police Station on Tuesday, January 30.

Meanwhile, he informed that he will be pushing a number of critical Bills through Parliament this year.

He advised that within the next six months, he intends to present a Bill for the merger of the Police Services Commission (PSC) and Police Civilian Oversight Authority (PCOA); table the new Jamaica Constabulary Service Act; and will be pursuing amendments to the Proceeds of Crime Act (POCA), which will require persons to explain sudden wealth.

“We also will be looking at the Anti-Gang Legislation, where we will be able to designate control persons to put (individuals) on watch lists… (so) we can, among other things, begin to target the dons,” he noted further.

The legislative reforms proposed in the Jamaica Constabulary Force (JCF) Strategic Review will be brought to Parliament, and the Major Organised Crime and Anti-Corruption Agency (MOCA) Act and the new Road Traffic Act are scheduled to be debated in the House of Representatives.