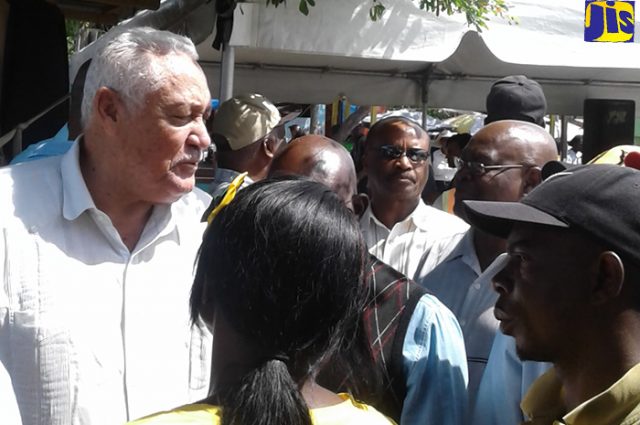 Minister of Transport and Mining, Hon. Lester ‘Mike’ Henry interacts with operators of public passenger vehicles (PPV) following the announcement that the Montego Bay Transport centre on Barnett Street in St. James will be renovated. The announcement was made at a media briefing held on Friday, February 23, at the Transport Centre.

Commuters, owners and operators of public passenger vehicles (PPV) in Montego Bay will begin to see improvements in the transportation centre, at the start of the new fiscal year.

The complex is to be renovated as part of a joint stakeholder effort to bring the facility back to an acceptable condition in keeping with its critical role in the development of the city of Montego Bay.

The first phase of the renovation is projected to commence in the next 60 days and is expected to cost an estimated $40 million, which will be funded from the budget of the Transport Authority.

The renovation and rehabilitation works will include the repair of the centre’s perimeter fence and surface outlay; the establishment of user-friendly commercial structures, and shelters for commuters; improvements in the bathroom facilities and security posts; and the implementation of adequate lighting.

The announcement was made by the Minister of Transport and Mining, the Hon. Lester ‘Mike’ Henry on Friday, (February 23) at a media briefing held at the transport centre on Barnett Street, St. James.

He said the work forms part of the Ministry’s thrust to addressing the social decay which has led to the breakdown of the transportation system over the years.

“Considering the physical decay of the transport centre over many years, the consequent exposure of its users to the elements and other challenges like security compromises, and the resultant widespread and disregard from PPV operators of the requirement to operate from the centre, as their licence dictates, it is good for me to be able to bring about a collective solution to the problems, working with the people on the ground,” he said.

The Minister also stressed that a coordinated approach will have to be taken to ensure that those who have not been utilizing the park will be attracted to use the facilities.

This he says will be achieved through the improvements being made to the park, along with widespread public education.

He also said that the new Road Traffic Bill will create opportunities for the improvement of social standards.

For his part, Joseph Shoucair, Chairman of the Transport Authority called on the private sector to invest in the development of transport centres in major urban areas in the country.

“It is not a secret that the government of Jamaica has lacked the resources over the years to build out parks as required and to the standard required, but we have decided that the time has come for us to address the problem,” he stated

“We will in due course engage the private sector and try to encourage them to build, own and operate bus parks. With our start in Montego Bay, we intend to set the standard that we expect to be followed throughout the island,” he added.

Meanwhile, Mayor of Montego Bay, Mr. Homer Davis has committed to partnering with the Ministry to improve the bus park, which he says has outgrown itself over the years and has led to a number of challenges, such as illegal parking and indiscipline behaviour among taxi operators.