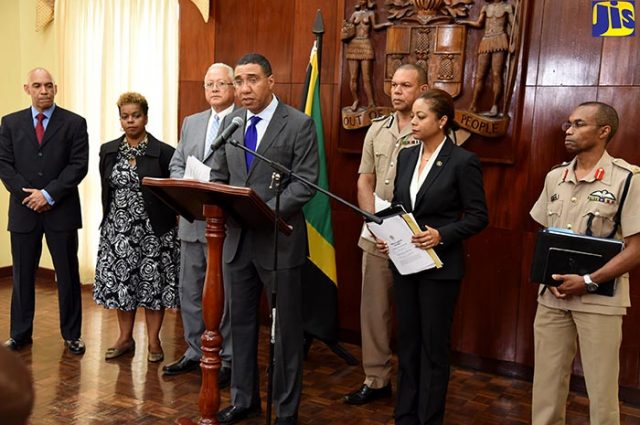 Prime Minister, the Most Hon. Andrew Holness, says the Mount Salem community in St. James “recommended itself” as a Zone of Special Operations (ZOSO).

Addressing a press conference at Jamaica House on Friday (Sept. 1) to announce the first ZOSO, the Prime Minister said the Jamaica Defence Force (JDF) and the Jamaica Constabulary Force (JCF) requested the operations in Mount Salem based on the trend of criminal activity in the community and its environs.

According to information provided by the police, some 12 gangs are operating in the area, which has recorded 54 murders since the start of the year, 16 in the Crawford Street district alone.

“Mount Salem recommends itself when you look at the murder statistics as one variable, ” Mr. Holness said.

The operations in the area, which began on September 1, will last for 60 days.

Major Godfrey Sterling of the JDF and Superintendent of Police, Kirk Ricketts are jointly in charge of operations in the Mount Salem special zone.

Managing Director of the Jamaica Social Investment Fund (JSIF), Omar Sweeny has been named Deputy Chairman of the Social Intervention Committee, which is to be established within five working days.

The Prime Minister said the operations will seek to dismantle all the gangs and create a safe community.

He said that the success of the operations will be determined by the reduction in murders, the return of public order, entrenchment of the community-building exercise “and a general determination that the community is now in a state where it can manage its own peace.”

He noted that if the objectives are not achieved, the law provides for the extension of operations following approval by Parliament.

The Prime Minister said that other zones will be declared in short order.