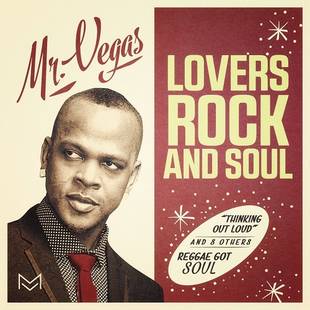 International Reggae and Dancehall Icon “Mr. Vegas” recently announced the upcoming release of his new album “Lovers Rock & Soul”, an 11 track L.P filled with reggae renditions of popular classics that have been loved over the generations. The first single from the album, “Thinking Out Loud”, a Rub A’ Dub version of Ed Sheridan’s hit song has already created excitement across the musical masses showing promise for his 7th Studio album.

Biggimani aka Big A from Jamaica’s IrieFM expresses his gratitude to Mr. Vegas,

“I must thank Mr. Vegas for dropping this album at this particular time, the vibe and the mood of the moment as it prevails is as if we forget about this particular era of reggae… It’s a bold move because it is not the album that will give you immediate gratification and give you 20 forwards in a dance right away… We say excellent work Mr. Vegas, Covers is an important part of reggae music, Lovers Rock is an important part of reggae music, we love the album and we give it the maximum support that we can.”

The album came together with a single idea to help retrieve reggae’s status within the International market while reaching out to a more mature audience. With this goal in mind he chose to honor the legends and songs that have helped inspire him. “Lovers Rock & Soul” stays true to the classic reggae sound while covering popular R&B, Pop and Reggae hits.

“I chose to recreate versions of songs that are already known on an international scale aiming to create a larger audience for both myself and reggae music. People of all generations will be able to enjoy this album, they already know the words, now they can easily sing along to the whole album from start to finish.” Says Vegas.

Mr. Vegas knew that for his vision to come to reality he needed to involve an all-star cast of musicians for the project. Together Dean Frazer, Danny Browne, Flabba Holt, Donald Dennis, Kirk ‘Kirkle Dove’ Bennett, Wade Johnson, Aeion Hoilette alongside “Lovers Rock & Soul’s” co-producer Cleveland Brownie of Steely & Clevie Fame and himself created an album that is bound to make its mark as one of Reggae’s greatest albums.