My Big Disappointment. The Poor Debating Strategy Of The Government.

Abolish Queen As Head of State

debates in Parliament for the 2021/2 fiscal year of the almost JA$ 831 billion budget.

The rebuttal is a critical phase in any debating strategy.  It is expected that all points raised by your opponent will be rebutted at some point in the debate. Certainly at the summing up at the end.  It is not immediately clear if the points not rebutted will be addressed when the Sectoral Debates which follow as night follows day immediately after this budget debating exercise. Even if so, this is a strange strategy.  You do not allow your opponent to score a point without your rebutting same. It is akin to a boxer refusing to counter punch his opponent. 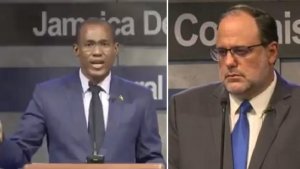 Hon. Mark Golding, Opposition Leader gave a rather comprehensive response to the Finance Minister, Dr. The Hon. Nigel Clarke’s budget presentation.  It was his first since being sworn in to that office as Opposition Leader. Hon.  Nigel Clarke did respond in his closing, but did not address Mark Golding’s proposals in their totality.  Among the points not addressed was in particular the one stating that Jamaica should become a Republic. That means abolishing the Monarchy.  Barbados PM The Honourable Mia Mottley has called on her country folks inter alia:

“You folks should stop loitering on her Majesty’s property.”

Why haven’t the Holness led JLP government not state their position on this vital matter of abolishing the Queen as head of state. The Opposition has long said it is on one accord with the government on this issue. Jamaica needs to repatriate her sovereignty. It is no secret that academics have said that our people have been mentally tarnished or scarred by our colonial past. 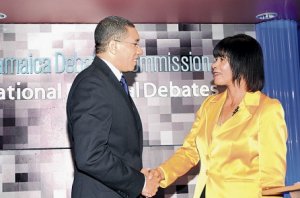 When  Portia Simpson Miller was sworn in as PM she declared that:

She failed to put her words into action.  Nothing has since happened since 2011/ 2012. Some almost (9) nine years later and still no action on removing the Queen as head of the Jamaican State.

Mottley not only expressed her laudable desire to abolish the Monarchy, but she gave a deadline. She was putting her integrity on the line. It appeared to be a serious commitment.

Sir. Hilliary Beckles has reminded us that inter alia:

“It is approaching 60 years since Trinidad and Jamaica got their  independence.  This is a time to review the situation of repatriating our sovereignty.”

“In 1962 both Trinidad and Jamaican leaders Eric Williams, Sir. Alexander Bustamante and Edward Philip George Seaga went to UK and were all embarrassed by British officials who laughed at them and sent them packing.  Seaga was concerned with development assistance.  Eric Williams wanted reparation grant.  Eric Williams described that experience by saying that this was tantamount to the British :

“Sucking out an orange and throwing out the trash.”

The then PM of Britian David Cameron said “forget it”  He was addressing a joint sitting of the Jamaican parliament when the issue of reparation was brought to the fore. Ironically it was Cameron’s forefathers who benefitted greatly from the slave trade and Cameron as an ancestor was one of the beneficiaries of this inheritance passed down to him through his natural line of succession. (Joint sitting means Senate & The Lower House being together at same time at a meeting).

It was not in our view farfetched to have expected Cameron’s own sense of morality to have dictated to him that he addressed the issue of reparation head on.

Hopeton O’Connor-Dennie is a veteran journalist who has International exposure.