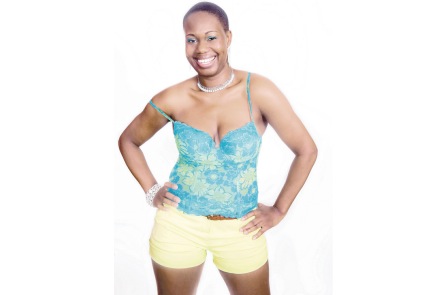 TORONTO deejay Nadera has etched a name for herself in the Canadian reggae market, thanks to well-received songs like Cheater’s Loss and Tit 4 Tat. With her first album to be released in a matter of days, she is already eyeing the Jamaican market.

The self-titled project will be officially launched November 9 in Toronto, Nadera’s hometown. It was produced by Tony Anthony, rated one of Canada ‘s top reggae singers.

Response to Cheater’s Loss and Tit 4 Tat was strong enough for Nadera to pursue music full-time. She had also worked as an actress

Though she has performed in other major Canadian cities such as Calgary and Vancouver, the Kingston-born Nadera believes making a name in Jamaica is just

“A lot of reggae artistes who live abroad would love to get a hit in Jamaica and I’m no different. They know people look to Jamaica for the hot stuff,” she said.

To help get that breakthrough, Anthony enlisted Jamaican producers Mafia McKoy of Blaqk Sheep Productions and Kevon Dixon of Blue Sky Productions to create beats for the 15-song set. The former produced Candy Shop, one of Nadera’s earliest songs.

Cheater’s Loss and Tit 4 Tat were recorded after Nadera appeared in the 2009 Canadian reggae musical, Soundclash. She was signed to independent record label Phylani Music which distributed the songs and will act in a similar capacity for the album.

Nadera Jackson grew up in the central Kingston communities of Rollington and Vineyard Town and recalls her first ‘gigs’ as a performer coming in school plays. Moving to Toronto, she maintained a love for the arts and studied acting at The Reel Fact Film & Television Studio in Toronto and Mick Baur Studio in Vancouver .

After Cheater’s Loss and Tit 4 Tat made Canadian reggae charts as well as Caribbean radio lists in South Florida and New York City, Nadera made a career decision.

“The schedules were conflicting at times, so I’ve put acting on hold for the time being,” she said.

Nadera plans to kick off local promotions for her album in December.

For the original report go to http://www.jamaicaobserver.com/entertainment/Nadera-looks-to-local-market_15352640