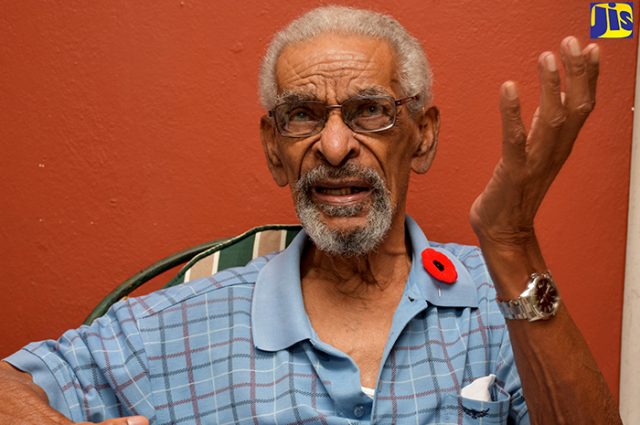 Former soldier who fought in World War II, Mr. Stanley Atkinson, who is 94 years of age.

The nation will, on Sunday, November 12, honour the memory of the fallen servicemen and servicewomen of World Wars I and II at the annual Remembrance Day ceremony, which will be held at National Heroes Park in Kingston.

Traditionally, Remembrance Day is observed on the second Sunday in November, and its primary purpose is to celebrate those who gave their service and ultimately their lives in the two world wars.

On November 8, 1915, the first Jamaican contingent under the command of Major W.D. Neish was sent off to serve in the First World War. Some 4,000 to 5,000 Jamaicans were involved in the two wars, some of whom served in the Royal Air Force while others joined the ground forces of the British Army and the Canadian Armed Forces.

General Secretary of the Island Council for the Jamaica Legion, Lieutenant Colonel Desmond Clarke, one of the organisers of the event, tells JIS News that the day’s activities are worth celebrating by all Jamaicans, because these not only recognise servicemen and servicewomen who served during the world wars but those who died while on the battlefield, and offers motivation to servicemen and servicewomen who currently serve the nation.

“We will have the traditional service with the laying of wreaths at National Heroes Park, and other activities in St. Thomas, Portland, St Ann’s Bay, Manchester and Montego Bay and Port Maria.

We expect some veterans who have served to be present also,” Mr. Clarke says.

Expected to lay wreaths at the National Heroes Park are the Governor-General, Prime Minister, Leader of the Opposition, Chief Justice, Mayor of Kingston, Chief of Defence Staff, Commissioner of Police, representatives from the Diplomatic Corps, the Commissioner of Corrections and Chairmen of the Jamaica Legion and the Royal Air Force.

The public is being urged to show their support for the military men and women who are veterans and also those who gave their lives serving by attending the services in each parish. Some services will close with a parade of uniformed groups.

Mr. Clarke tells JIS News that some 40 ex-servicemen and ex-servicewomen are expected to attend the ceremony.

Meanwhile, former soldier who fought in World War II as a Royal Air Force member, Mr. Stanley Atkinson, tells JIS News that he is pleased to know that Jamaica still remembers the contribution ex-servicemen and ex-servicewomen made, although he will not be able to attend the ceremony on Sunday.

“It’s good to know that we are still being recognised. People keep reminding me, otherwise I would have forgotten it long ago,” Mr. Atkinson, who is 94 years of age, says.

He went to World War II with two of his brothers, one of whom he never saw again after the war ended.

On the other hand, his neighbour, Retired Jamaica Defence Force Sergeant, Peter Williams, will be attending the Remembrance Day event to offer his support.

“I am pleased to know that Jamaica still recognises the hard work and sacrifices that were made decades ago by those servicemen and servicewomen,” he tells JIS News.

Mr. Williams is one of hundreds of persons who sell poppies through the annual National Poppy Appeal to raise funds to maintain Curphey Home in Newport, Manchester, which is a residential facility for indigent ex-servicemen and ex-servicewomen, and assists with the welfare of other ex-servicemen across the island.

Additionally, Curphey Home, which was founded in 1958, is the only establishment of its kind in Jamaica that provides food, clothing and nursing for ex-servicemen and ex-servicewomen on a daily basis.

“It is very important for Jamaicans to support the National Poppy Appeal. These ex-servicemen and ex-servicewomen are in need, and it is only through our financial donations that they can be assisted,” Mr. Williams tells JIS News.