Barry White’s Iconic Single “Never, Never Gonna Give Ya Up” Gets Remixed by Lord Finesse

“R. Eric Thomas, a Baltimore-bred writer and playwright, is one of my favorite writers.” – LIN-MANUEL MIRANDA

BALTIMORE, Feb. 11, 2022 /PRNewswire/ — Celebrated humorist, television writer, and national bestselling author R. Eric Thomas is returning to his roots as an award-winning playwright. The mind behind Here For It, or, How to Save Your Soul in America, a Read with Jenna club pick featured on Today, and Reclaiming Her Time: The Power of Maxine Waters co-authored with Helena Andrews-Dyer, will debut three plays at a variety of theatre companies along the Mid-Atlantic region. Already an established, acclaimed playwright and television writer (AppleTV+’s Dickinson, FX’s Better Things), Thomas hopes that these productions will provide audiences the opportunity to experience the joy of theater. 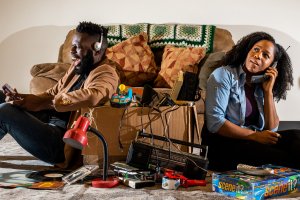 “There is nothing that I love more than sitting in a theater with other people, laughing in unison, understanding the world, feeling our hearts beat as one,” Thomas says. “These are plays of our moment, all the good that we have the potential for and all of the complexity that we’re facing together.”

For four years, Eric Was a Senior Staff Writer for Elle.com where he wrote “Eric Reads the News,” a daily current events and culture column.  He has been published multiple times in The New York Times, TIME, Philadelphia Inquirer, Philadelphia Magazine, and others.

Backing TrackArden Theatre Company, PhiladelphiaMarch 3-April 10, 2022Ardentheatre.orgA karaoke play and live mixtape rolled into one, Backing Track features an all-POC cast and tells a story about falling in love while grieving, chosen family, gentrification, laughter, and rebirth.  Directed by Becky Wright and commissioned by the Arden.

The Folks at HomeBaltimore Center Stage, BaltimoreMarch 17, 2022-April 10, 2022Centerstage.orgThis modern riff on family sitcoms comes to Thomas’ home city of Baltimore. The Folks at Home is a sharp and heartfelt political comedy in the style of Norman Lear’s classic sitcoms of the 70s and 80s. Directed by Stevie Walker-Webb and workshopped by PlayPenn’s The Foundry.

Crying on TelevisionEveryman Theatre, BaltimoreMay 31, 2022-June 26, 2022Everymantheatre.orgCrying on Television, a laugh-out-loud farce, will leave you feeling like you’ve watched Friends, Living Single, The Bachelor, and Grey’s Anatomy all rolled up into one. Directed by Reg Douglas, developed at Nashville Repertory Theater and workshopped at the Seven Devils Conference.