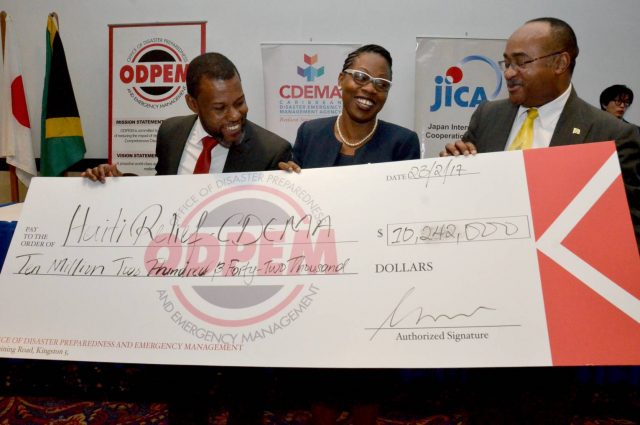 Photo: Executive Director, Caribbean Disaster Emergency Management Agency (CDEMA), Ronald Jackson (left), hands over a representational cheque valued at $10.2 million to Director General, Office of Disaster Preparedness and Emergency Management (ODPEM), Major Clive Davis (right). The money will go towards the agency’s Help Haiti Initiative, through which it is providing support for Haiti, which was devastated by Hurricane Matthew last year. Also pictured is Director, Urban and Regional Planning, Ministry of Local Government and Community Development, Marsha Henry-Martin. Occasion was a post-evaluation workshop for phase two of the Caribbean Disaster Management project (CADM2) at The Jamaica Pegasus hotel in New Kingston on February 23. CADM2 was undertaken to further strengthen the disaster management capacity in the region.

A national emergency communication network is to be established to strengthen early warning systems for disasters at the local level.

This has been disclosed by Minister of Local Government and Community Development, Hon. Desmond McKenzie, who said this will be undertaken in collaboration with the Japan International Cooperation Agency (JICA).

Director, Urban and Regional Planning, Ministry of Local Government and Community Development, Marsha Henry-Martin, read the Minister’s speech at a post-evaluation workshop for phase two of the Caribbean Disaster Management project (CADM2), at The Jamaica Pegasus hotel in New Kingston, on February 23.

He noted that the establishment of this network is important to increasing resilience to disasters at the community level, which remains a key area of focus of the Government.

The Office of Disaster Preparedness and Emergency Management (ODPEM) is to undertake the initiative with grant funding from JICA.

In addition, some community early warning systems are to be developed and rehabilitated by the Water Resources Authority, following the receipt of grant funding.

Also highlighting the importance of these mechanisms, Executive Director, Caribbean Disaster Emergency Management Agency (CDEMA), Ronald Jackson, noted that countries in the region have to remain steadfast in resolving the challenges that have prevented the establishment of “robust people-centred early warning systems”.

“CDEMA and many of the regional stakeholders remain committed to the aspirations of advancing early warning systems as a means of achieving community resilience,” he said.

In the meantime, Ambassador of Japan to Jamaica, His Excellency Masanori Nakano, said his country remains committed to partnering with Caribbean countries to help build disaster resilience using its own experiences.

“Our coming together at this JICA/CDEMA workshop is a clearer indication that Japan, in spite of its own disaster-risk challenges, is wholeheartedly committed to providing sterling support and expertise to address the disaster risk challenges faced by small-island developing states (SIDS) in the region, especially related to climate change,” the Ambassador said.

During the ceremony, Mr. Jackson presented a representational cheque valued at $10.2 million to ODPEM for its Help Haiti Initiative, through which the agency is providing support for Haiti, which was devastated by Hurricane Matthew last year.

The first phase of the CADM project, which was implemented from 2002 to 2006, sought to mitigate damages in the CDEMA participating states and made significant contribution to the implementation of the Comprehensive Disaster Management (CDM) Strategy developed by CDEMA.

Activities of the project were carried out in Barbados, Trinidad and Tobago, and St. Vincent and the Grenadines.

For the second phase, CADM2 was undertaken from 2009 to 2012 to increase the capacity of CDEMA and five pilot states (Belize, Dominica, Grenada, Guyana, and Saint Lucia) for managing flood risks.

Through the project evaluation, Jamaica hopes to learn from the experiences of project implementation by CADM2 countries as well as the challenges and gaps identified for post-project continuation and sustainability.

The objectives of the two-day workshop are to assess the factors influencing the current status of CADM2 and to make recommendations for the sustainability of CADM2 intervention.