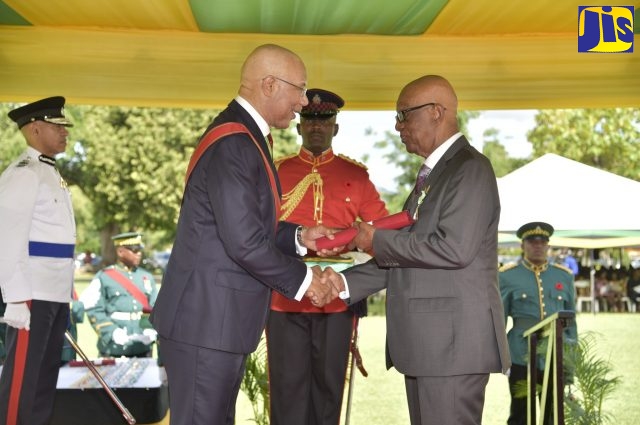 ‘A man of many trades and master of them all’ aptly characterizes Pastor Aston Archibald Barnes, who has given invaluable service and countless support to the West Indies Union Conference of Seventh-day Adventists and communities in south Manchester.

He has worn many hats, serving as pastor; financial controller and advisor; auditor; community activist; author; philanthropist; teacher; and businessman and, in the process, has transformed many lives and revolutionized the operations in the entities and sectors he has been a part of over the years.

In recognition of his sterling contributions to the clergy, social development, welfare and philanthropy, Pastor Barnes was duly conferred with the Order of Distinction in the rank of Officer (OD) at the annual ceremony of investiture and presentation of National Honours and Awards at King’s House on National Heroes Day, Monday, October 15.

I was not expecting it, as I did not do these things for recognition and praises. I just decided to work hard and never try to push myself to get anything [in return],” he humbly states.

Pastor Barnes has served the Seventh-day Adventist [SDA] Church and West Indies Union Conference in various capacities over the past 65 years.

Between the 1950s and 1970s, he worked at West Indies College [WIC, now Northern Caribbean University {NCU}] in Manchester as a Mathematics teacher and Chairman of the Business Administration Department.

During the period, he twice took time off to study Business Administration at WIC, and Howard University in the United States of America.

“My first job was to teach Mathematics at West Indies College and on my return from Howard University, I became Chairman of the Business Administration Department, and with this position, I also taught Business Law, Economics and Accounting,” Pastor Barnes informs.

In 1970, he demitted his posts at the College to take up duties as auditor for the West Indies Union, which incorporated Jamaica, the Bahamas, Cayman Islands, and Turks and Caicos Islands.

Pastor Barnes was also responsible for auditing West Indies College, Andrews Memorial Hospital, the west, east, and central Jamaica SDA conferences, as well as the conferences and missions for the aforementioned islands.

With these mammoth tasks and countless responsibilities, it became challenging for him to balance work and family life as, invariably, it meant spending time away from loved ones to fulfil work obligations across Jamaica and the region.

A major development for Pastor Barnes, of which he proudly speaks, came in 1989. After 15 years of negotiating and pursuing approval, he was able to implement and manage his brainchild – the West Indies Union Conference of Seventh-day Adventists Capital Development Fund.

This Fund remains as a beacon in the Union, providing financing for capital expansion and improvements at low interest rates for its churches, medical and educational institutions.

In his ongoing bid to offer financial advice and support to the Union’s affiliates, Pastor Barnes was inspired to author the book – “Church Financing: Yesterday, Today and Tomorrow”.

“I started to search every library that I could think about to get information to help me with the awesome responsibility of being the chief financial officer for the WIU, and I could not find any material. So I decided that I should leave a book that would detail all my experiences so that the younger generation will have material to guide them,” the author further explains.

The community activist says he has always had a deep interest in the affairs and development of his childhood district, Campbell’s Castle in Manchester, and has spearheaded several fund raising activities to support the community.

“I even formed a ‘Hundred Club’ and solicited funds from persons and entities across Jamaica, the United States [and] England. I became an international solicitor and my brother also joined in the efforts to get funds to maintain the school in the area,” Pastor Barnes informs.

He further tells JIS News that: “we bought a bus to transport the children from all the remote communities, to get them to and from school safely… and this was all in an effort to develop the community”.

In November 2000, he retired from active service, but established the United Trust Fund Limited and served as its Chief Administrator.

“I formed this money lending company with my brothers by pooling our savings. So I had it registered, audited yearly and we filed the returns. I did this, not to make money, but to assist persons who needed some form of financial backing and support, especially members of the Adventist church,” he explains.

“When you are accustomed to a busy life and you retire, if you do not have something to keep you active, you will die quickly. So I make it my duty to continue to give of service and offer support as much as possible,” he says.

In recognition of his outstanding contributions to the church and its institutions, Northern Caribbean University bestowed on him an Honorary Doctor of Laws (LL.D) degree at its graduation exercise in August 2000.  Prior to that, he received the Distinguished Alumnus Award in 1996.