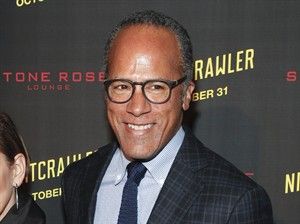 NEW YORK _ While Lester Holt’s ascension to full-time anchor of NBC’s “Nightly News” came as a result of Brian Williams’ stunning downfall, no one can say he hasn’t worked hard to take advantage of an opportunity.

The California-born Holt becomes the first African-American to be sole anchor of a network evening newscast. Max Robinson was part of a three-anchor team with Peter Jennings and Frank Reynolds at ABC News in the late 1970s and early 1980s.

Holt, at 56 the same age as Williams, is a graduate of Cal State University in Sacramento. He was a reporter at CBS affiliates in New York and Los Angeles and worked at CBS News’ “48 Hours.” For 14 years, he was the evening news anchor at WBBM-TV in Chicago.

He came to work at NBC News in 2000, primarily as an anchor at MSNBC. He logged so many hours on the air following the Sept. 11, 2001 terror attacks that he earned the internal nickname of “iron pants.”

When MSNBC took a partisan turn, Holt’s focus shifted to NBC News. He co-anchors “Dateline NBC” and did the same for the “Weekend Today” editions. He anchored “Nightly News” on the weekends and was Williams’ primary sub during the weekday editions.

When Williams was suspended for six months in February, Holt was designated to fill in. For the first four months, Holt was essentially in a holding pattern; NBC did little to promote him, not knowing if the job would become permanent. Holt won praise for landing the first interview with the man who filmed the police shooting of an unarmed black man in South Carolina, and some critical cringes for one newscast anchored from a helicopter above the scene of a train crash.

“Nightly News” was for many years dominant in the ratings. Since Williams was suspended the broadcast has slipped into a tight week-to-week battle for the top with ABC’s “World News Tonight,” although ABC had been gaining even before Williams left.

Holt is an avid bass guitar player in his spare time.