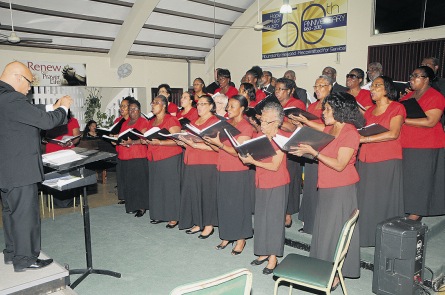 AUDIENCE members were treated to an evening of classics at the National Chorale of Jamaica’s 2013 Concert Season Gala Performance on Saturday.

Hosted at Hope United Church on Old Hope Road, the choir, under the baton of long-standing musical director Winston Ewart, dedicated its performances — in this its 41st year — to former musical directors Carl Geoffrey Fairweather, Vibart Seaforth and Maurice Gordon.

Patrons for the evening’s presentation were former Governor General of Jamaica Sir Kenneth Hall and his wife, Lady Hall.

With the ladies dressed in bright red and the evening themed ‘Music for Yuletide’, the chorale offered Schubert’s Mass No 2 in G — a favourite of Seaforth and Gordon — and Bach’s Sleepers Wake — loved by Fairweather. This section of the programme was accompanied by a chamber orchestra that featured Stephanie Williams (piano), Paulette Bellamy (violin), Darren Young (viola), Ann McNamee (organ), Kamla Hamilton (keyboard), Althea Neblett (violin/oboe), and Alistair Holness (cello). The musicians accompanied the chorale superbly; offering requisite support and presence to add to the true enjoyment of the works. This added a particular elegance to the evening, especially with the keyboard set to replicate a harpsichord and the sweet fluttering of violins.

Holness gets particular mention for her control and tone and the Cargill-Bellamy duet Thy Love is Mine was a show of musical blend and dexterity. The choir was at its best in soft passages that allowed for the sweet caress of the score to translate for the audience. They would, however, do well to temper the mezzo forte and forte movements as they were not mellifluous. The application of choral technique and conscious singing, with requisite acknowledgement of the melody line, would improve these areas.

The concert’s second-half featured well known pieces of a more eclectic selection, very appropriate for the theme. While the arrangement of the pieces might not have translated the mounting joys of Christmas, there were gems all round.

Paul Manz’s E’en So Lord Jesus, Quickly Come possessed several sweet moments where the choir did well, as did Carol of the Bells by Robert Sterling. The classics Bring a Torch, Jeannette Isabella and O Holy Night were also well received. The ladies chorus of As Joseph was Walking was a highlight of this section, followed closely by Dance Little Goatling, both arranged by Edmund Walters. Shepherds on a Hill, conversely, was a seeming disharmony between and within voice parts.

The choir showed great pronunciation and enunciation abilities, absent in some pieces, in two comedic items Christmas is Coming and Santa Claus, you’re too fat. The audience’s ability to hear the words certainly added to the enjoyment of these two pieces.

The audience received seasonal cheer from a lovely Jamaican suite that began with an item written by noted Jamaican Clyde Hoyte, Jamaican Noel. An arrangement of the classic An’ she rocked the baby to sleep by the conductor “WAGE” featured a beautiful solo from soprano chorister Yvonne Miller. The concert rounded out with Noel Dexter’s Never a Baby Like Jesus and Burnett’s Tenk You for the Christmas.

The evening was well spent with the traditional National Chorale of Jamaica as the group truly entertained the audience.

For the original report go to http://www.jamaicaobserver.com/entertainment/NCJ-celebrates—Music-of-Yuletide–_15572588