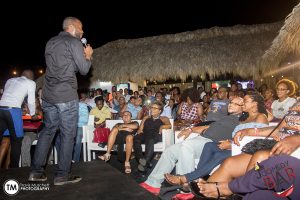 The successful Johnny Live Comedy Bar series, now in its third season, is being staged weekly on a Tuesday night at 100 Hope Road in Kingston until October 31. The series has garnered a huge following since the first staging in Portmore and has now become a staple on a Tuesday night in Kingston.

“The support from Kingston has been overwhelming, I want to big up the audience because it could not have been a success without them. People enjoy laughter and comedy which is what the comedy bar stands for. We take pride in providing a safe, classy, fun and mature environment where people feel free to express themselves.” Christopher ‘Johnny’ Daley , the series owner shared

The weekly show has also created an environment for vested and aspiring comedians to showcase their talent and work on their craft, especially young comedians who participate in the weekly open mic segment.

A few of these aspiring acts have been taken under the wings of Christopher ‘Johnny’ Daley himself and are now being officially coached by the actor and comedian, who has over 20 years experience on the stage.

Among these new acts is recording artiste and producer Alex formerly of T.O.K. The artiste has shown interest and has been actively engaged in the series, he has even won a cash prize of $5,000 which is provided weekly in the fun open mic segment.

Another young act being assisted by Daley is John Luc, Chris believes he has two of the main ingredients of becoming a good comedian; bravery and fearlessness. There has also been an interjection of female energy with actress and comedian Malika Bryce from Montego Bay 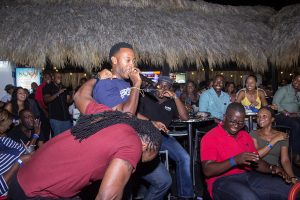 “Comedy should be injected into our television shows, commercials and into the homes of all Jamaicans, because there is room for it to grow. Personally, I’m looking to expand my reach on social media and to move into vloging, because there is always room to grow and Johnny LIVE Comedy Bar will continue to push comedy right across Jamaica that is what we intend to do, “ Johnny added

Christopher Daley, now a brand ambassador for BIgga Jamaica and their ‘ Bigga Socially Aware Share With Care’ campaign, is helping young people to be more aware and informed about the ills of over exposure on social media. The comedian is encouraging these kids in various schools to post and share responsibly while addressing issues of Cyber bullying and ‘sexting’.

“ I am very happy to be on board because I get a chance to support a project that will be helping our young people and it’s very important to participate to rebuild and rekindle my relationship with the people and corporate brands of Jamaica.” Johnny shared

There will be two-for-one specials at the bar for the ladies, the Open mic segment will be open to all patrons and will feature a grand prize of $5,000 awarded to the audience’s favorite.