State Minister in the Ministry of Education, Youth and Information, Hon. Alando Terrelonge (left), and Ambassador of the People’s Republic of China to Jamaica, His Excellency Tian Qi, lead a tour of the newly built Confucius Institute at the University of the West Indies, Mona, Kingston, following the handover ceremony on Monday (October 14). 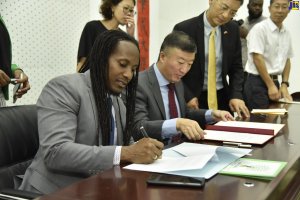 State Minister in the Ministry of Education, Youth and Information, Hon. Alando Terrelonge (left), signing the handover certificates with Ambassador of the People’s Republic of China to Jamaica, His Excellency Tian Qi (right, seated), during a handover ceremony at the Institute, located at the University of the West Indies, Mona, Kingston, on Monday ( October 14).

The Caribbean’s newest and largest Confucius Institute, which was built by the People’s Republic of China at the University of the West Indies (UWI) in Kingston, was officially handed over to the Jamaican Government on Monday (October 14).

The facility, which was constructed at a cost of US$5 million and is situated at the former Personnel Office on the UWI’s Mona campus, will replace an existing centre located along Gibraltar Road that was launched in 2009 and, at the time, was the first to be established in the English-speaking Caribbean.

State Minister in the Ministry of Education, Youth and Information, Hon. Alando Terrelonge, who spoke at the handover ceremony, noted that not only will the institute teach Jamaicans about the principles of Confucius but also how the Chinese societies have developed for several millennia.

In acknowledging the long-standing partnership between Jamaica and China, Mr. Terrelonge urged Jamaicans not to forget the bond between both countries. 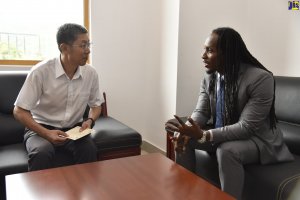 State Minister in the Ministry of Education, Youth and Information, Hon. Alando Terrelonge (right), in discussion with the Chinese Director of the Confucius Institute, Lei Feng, after the handover ceremony for the Institute, located at the University of West Indies, Mona, Kingston, on Monday (October 14).

“I really hope that my colleagues in the Institute and the University will make full use of this perfect building and to [transform] it into a new bridge of friendship between the Chinese people and the Jamaican people, and a new platform of the cultural exchanges between the two countries,” he stated.

For his part, Deputy Principal of UWI Mona, Professor Ian Boxill, said that the occasion symbolises the strengthening of ties between China and the Caribbean, in general, noting that “it is also an example of what can be achieved through effective collaboration”.

“This building would not have been possible without the cooperation between the Governments of China and Jamaica, the National Education Trust, the UWI Mona Campus, and the Qingjian Group, who executed the construction. Congratulations to all stakeholders on a job well done,” he said.

Professor Boxhill also commended the team at the Institute who, over the last 10 years, worked assiduously to fulfil their mandate and “have truly done an excellent job of fostering cross-cultural understanding between Jamaica and China”.