New HBCU Documentary Film: “National Battle of the Bands: A Salute to the Battle”

National Battle of the Bands: A Salute to the Battle film featuring Norfolk State University, The Spartan "Legion" Marching Band

Film Airs in More Than 60 Markets Across the U.S. in Honor of Black History Month 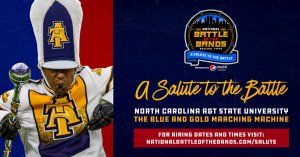 National Battle of the Bands: A Salute to the Battle film featuring North Carolina A&T State University, The Blue and Gold Marching Machine

“A Salute to the Battle is a documentary film that brings the action, energy and pageantry of the ‘Battle’ performance to viewers, in an up close and personal perspective, right into comfort of their homes where they can experience the action with their friends and family,” says Derek Webber, Executive Producer & CEO of Webber Marketing. “There is so much pride and prestige that accompanies the HBCU band experience and the long legacy of trailblazers who paved the way for HBCU bands to exist. We are honored to play a part in continuing the celebration and sharing of their stories with the masses through our films and events.”

The eight Historical Black Colleges and Universities (HBCU) marching bands appearing in the film participated in the 2021 NBOTB in Houston, Texas. The goal of the documentary is to continue amplifying the importance and impact of the National Battle of the Bands event, the participating bands, and its members and the HBCU community at large.

“At Pepsi, we’ve committed to supporting HBCUs year-round and I’m honored to help shine a light on these talented marching bands with this new documentary release,” said Chauncey Hamlett, VP and CMO of PepsiCo Beverages North America (South Division). “These bands are part of the driving force in the celebrated HBCU culture, bringing the energy, hype, and history to every game.”

The historical significance of HBCU bands is sown into the fabric of society. HBCU marching bands continue to be front and center at some of the biggest moments in history; filling the air with their unified sound while marching proudly and dancing unapologetically in celebration of their ancestors who paved the way for their rhythm to be on display for all to see, hear and feel.

For more information about the NBOTB and its “A Salute to the Battle” documentary film visit www.nationalbattleofthebands.com/salute and stay updated on social media at @NationalBattleOfTheBands (Facebook/Instagram) / @NationalBOTB (Twitter).