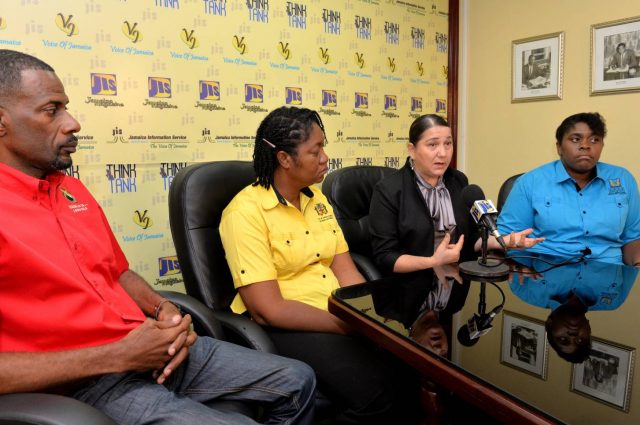 The Ministry of Industry, Commerce, Agriculture and Fisheries (MICAF) is developing a forecasting system designed to boost measures to control the beet army worm.

Deputy Research Director at MICAF, Michelle Sherwood, says the system, being developed with support from the Food and Agriculture Organization (FAO) of the United Nations, is one of several strategies being undertaken by the Ministry.

Mrs. Sherwood indicated that it “will help to tell when the beet army worm will be at the various stages in the field, using data on temperature that is collected from the Meteorological Office”.

This, she added, will better enable the Ministry, through the Rural Agricultural Development Authority (RADA), to prepare farmers to combat the worm’s onset.

She was speaking at a Jamaica Information Service (JIS) Think Tank at the Agency’s head office in Kingston on May 12.

Mrs. Sherwood said the system is one of several key measures that RADA is employing to eradicate the pest.

Another pivotal intervention, she informed, is mass trapping, a system originally developed for mosquitoes, which utilises light to attract, snare and kill insects.

Additionally, Mrs. Sherwood said RADA was also in the process of concluding a pilot for another strategy called the ‘mating disruption’.

This, she explained, entails using pheromones (the secreted chemical that attracts the male insect to the female) across the target area to prevent male insects finding females and mating.

These engagements are being complemented by sensitisation sessions, which, Mrs. Sherwood said, RADA is conducting within communities, while encouraging farmers to participate in these.

“So we have been meeting with the farmers and alerting them (to the fact) that the population has increased, and so we need to step up the management practices,” she stated.

Ms. Webb indicated that the sessions were designed to ensure that “we can get more hands-on and more field experience demonstration of the scouting exercises”.

RADA officers have also been reassigned to areas impacted by the beet army worm, to increase the level of interaction with affected farmers in order to get more information on the extent of the infestation. These areas include New Forest in Manchester, and St. Elizabeth.

Ms. Webb emphasised that the farmers must increase their surveillance activities to between two and three times per week, “as effective management of the pest depends on proper timing with insecticidal treatment”.

Surveillance, she said, would allow the farmers to recognise the stage to which the pest has developed, which would guide them on the appropriate treatment to apply.

Additionally, Ms. Webb encourages farmers to rotate the chemicals they use, as the pest will eventually get accustomed and resistant to frequently used applications.

Senior Director of RADA’s Training, Technology and Technical Information Division, Winston Shaw, pointed out that “farmers need to keep their field clean, free of weeds, rubbish, and anything that the pest can hide under”.