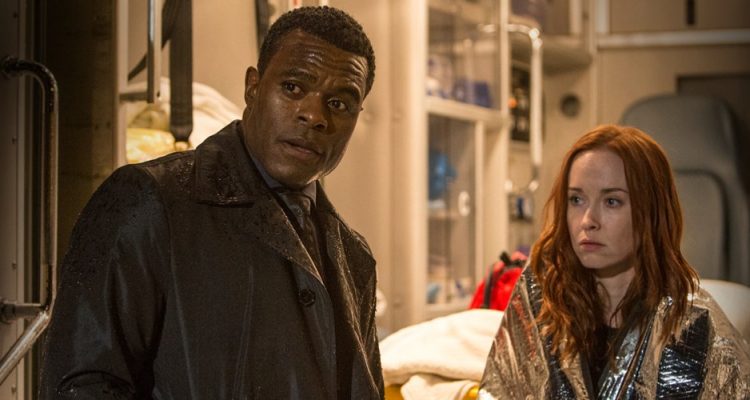 A new tv drama series Shoot The Messenger will debut Monday, October 10th, 9:00 P.M. prime time on CBC TV. The show will continue to air every Monday thereafter at the same time. The show’s creator, Hungry Eyes Film and Television.

It was Executive produced by Sudz Sutherland and co produced by Jennifer Holness. Sudz and Jennifer are a successful and enterprising husband and wife team, who also produced the award winning Feature Film Home Again that won the prestigious PAFF‐BAFTA Festival Choice Award in Los Angeles and was nominated for Best Direction from the Directors Guild of Canada.

There’s been multiple series of events around the time of the show’s inception which impacted our media. Over the past year or more there has been mixed matters of personal and political nature which seeped into our prime time TV programs, in the news, shows as well as the front pages of newspapers. Those happenstances which undoubtedly left nothing much to our imagination, presented vivid and dramatic reality show type spectacles of events that over time shockingly grazed viewers eyes locally and transcended local TV norms to impact onlookers the world over. Things eventually settled down and our usually calm sophisticated presentation of events were tidied and seemingly wiped clean as things went back to normal with still many unanswered questions and presumably dead ends.

Shoot the Messenger producers in keeping with the trend of the times and “feeding viewers hungry eyes”-Sudz were prompted through their artistic endeavours and inspiration to give viewers more of what they love about TV, the drama. They created the political crime thriller as somewhat of a continuum to the sedated momentum of dramatic events their audience will nonetheless appreciate.

Shoot The Messenger stars Elyse Levesque who plays Daisy Channing a young reporter who becomes entangled in the criminal underworld after bearing witness to an apparent gang related murder.

The show also stars Lyriq Bent who has starred in various lead and supporting roles both in film and television since he began his acting career. He plays a police homicide detective in Shoot The Messenger who is personally involved with the young reporter.

Bent has worked with Hungry Eyes producers previously on other films, expresses a great deal of respect for the work of Sudz Sutherland and Jennifer. Their production methodology on Shoot The Messenger really challenged him as an actor. Inspite the challenges he rose to the occasion, time and again to achieve the show’s objectives. People grow through change, “never place limits on that which you set out to accomplish” -Lyriq Bent

when asked about his dream role, he doesn’t have any. It would be limiting “if you place limits you might never know your full capability”. -Lyriq Bent
The show was filmed in Toronto at different locations throughout the GTA. The humanitarian trait in the character he plays presented a unique and well appreciated opportunity for perspective into the life of an officer “they are people just like us, they put on their pants one leg at a time just like everybody do” -Lyric Bent