NHT to Partner with Private Developers to Deliver More Houses 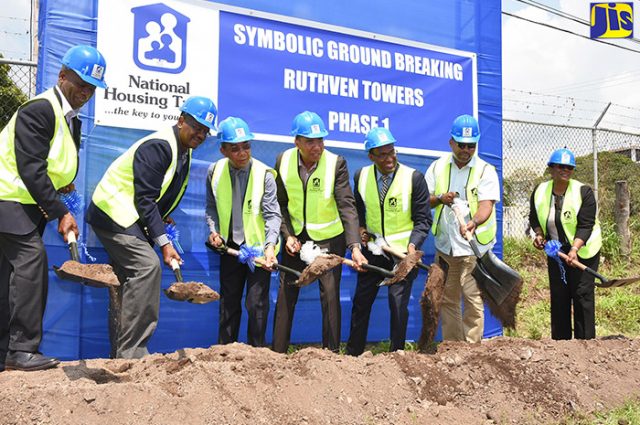 The National Housing Trust (NHT) will be partnering with more private developers in a bid to significantly increase the number of affordable homes that it delivers to the market.

He noted that this is intended to provide in excess of the15,000 homes being targeted for development and delivery by 2020, as well as other units thereafter.

This, Dr. Clarke added, is consistent with the mandate of Prime Minister, the Most Hon. Andrew Holness, who has portfolio responsibility for the NHT, that the agency builds more affordable homes for Jamaicans.

The Chairman made the announcement during the recent ground-breaking ceremony for the NHT’s $4.1 billion Ruthven Towers apartment complex on Ruthven Road in St. Andrew.

He informed that advertisements were placed locally and internationally during August, inviting submissions from interested parties of which 10 have to date been received.

He said the NHT will continue to accept submissions until the end of October and, thereafter, pre-qualify the participants by the end of November.

“We are going to shortlist (them) and invite proposals for each parcel of land according to our criteria, so that construction can begin sometime in 2018/19; the vast majority of houses to be developed under this programme would be (in the range of) $5 million. This will allow us to move beyond the target of 15,000 homes,” the Chairman explained.

Dr. Clarke said that “once we get this programme (going) and…the private sector moving in tandem with the public sector, we expect to break the bottleneck of housing demand and delivery and address the market (needs) that currently exists…particularly at the low-income segment.”

Noting that he is not satisfied with the targeted 15,000 houses, Dr. Clarke contended that “if we unleash the energy of private enterprise, we believe that we can do much more as far as affordable housing is concerned.”

“So the NHT (is putting) in place this arrangement in order to engender significant acceleration in the number of houses brought to market and, at the same time, a significant reduction in the time it takes from conceptualization to delivery,” he added.

Dr. Clarke said the open invitation is aimed at generating competition among local and international developers “ensuring that we have an efficient market and, at the end of the day, our contributors get the best value for money.”

Meanwhile, Mr. Holness said the Government must act as a facilitator to ensure that housing developers provide solutions as rapidly as people are moving into urban areas.

This, urban drift, he noted, results from people’s desire to be close to the centre of economic activity.

“An agency like the NHT must correct the market failure that has happened over many years where the private development market has not necessarily been able to keep pace with the demand in urban areas,” he contended.

He noted that people have been using their own initiative to, as best as they can, provide a home and have invested in block and steel to build.

“But what if that investment in block and steel is captured in a formal way that they could build (on) a pre-done house (and) they could just buy the house instead of having to go and build it (from scratch)?” he argued.

Against this background, Mr. Holness said the NHT’s role and structure was being changed to “fully realize its real mission which is not just to build houses, but to create formal communities.”

“The NHT acts as a financial intermediary for housing. So those persons… should consider contributing to the agency, so that you can own a properly built house,” he added.