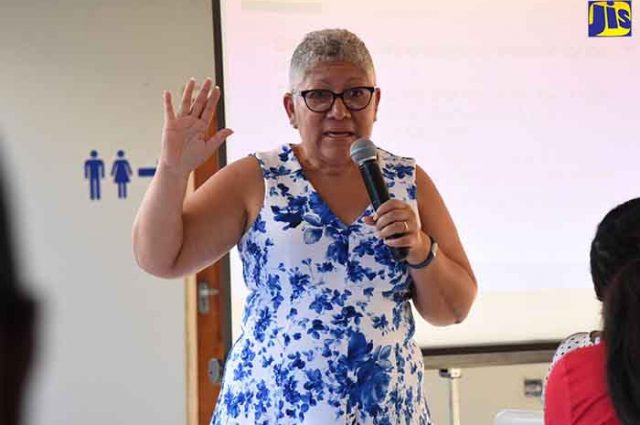 Chief Technical Director in the Office of the Prime Minister, Jacqueline Lynch-Stewart, addresses a National Identification System (NIDS) town hall meeting at the University of the West Indies, Mona, on Tuesday (January 30).

Chief Technical Director in the Office of the Prime Minister, Jacqueline Lynch-Stewart, has reiterated the call for Jamaicans to support the National Identification System (NIDS), noting that it will address the major issues the nation faces with undocumented youth.

“We have a large number of young persons who have no identification (ID). Not having an ID puts you at a disadvantage. It stops you from having opportunities,” she noted.

“This national ID is going to address that type of challenge that we now have within our country,” Ms. Lynch-Stewart added.

She was speaking at a NIDS town hall meeting held on Tuesday, January 30 at the Undercroft of the University of the West Indies (UWI), Mona, where concerns from youth regarding the new system were addressed.

Ms. Lynch-Stewart told the young people that NIDS will assist them to be easily identified and processed when they engage with members of the security force.

She said it will also address the problems faced by many older Jamaicans, who are at a disadvantage in accessing critical services, including healthcare, because they
never received an ID.

Ms. Lynch-Stewart reminded persons that their voter’s ID is not a national ID.

“Also, what happens to us is that because a driver’s licence and a voter’s ID are required at age 18, there is a huge gap for a lot of young persons, who are unidentifiable, because the only ID they can possibly get prior to 18 is a passport, and a passport is a far more expensive piece of ID. So, you have to find the resources to get the passport, and it’s really hard to spend that kind of money when you’re not travelling,” she pointed out.

NIDS is intended to provide a comprehensive and secure structure to enable the capture and storage of identity information for all Jamaicans, where each citizen will be provided with a randomised nine-digit National Identification Number (NIN), which they will have for life.

The layered roll-out and management of the NIDS will be handled by a new agency, the National Identification and Registration Authority (NIRA), which will replace the Registrar General’s Department (RGD) and provide more enhanced services. The roll-out of NIDS is slated to begin with a pilot project in January 2019, focusing on civil servants.