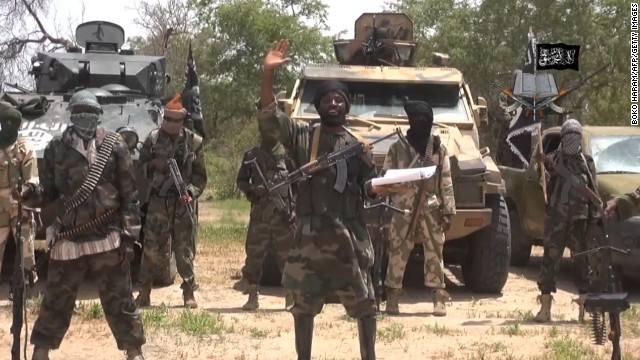 (FILES) -- A screengrab taken on July 13, 2014 from a video released by the Nigerian Islamist extremist group Boko Haram and obtained by AFP shows the leader of the Nigerian Islamist extremist group Boko Haram, Abubakar Shekau (C). Boko Haram gunmen killed 48 fish vendors in Nigeria's restive Borno State, near the border with Chad, the head of the fish traders association told AFP on November 25, 2014. "Scores of Boko Haram fighters blocked a route linking Nigeria with Chad near the fishing village of Doron Baga on the shores of Lake Chad on Thursday and killed a group of 48 fish traders on their way to Chad to buy fish," Abubakar Gamandi said. AFP PHOTO / BOKO HARAM RESTRICTED TO EDITORIAL USE - MANDATORY CREDIT "AFP PHOTO / BOKO HARAM" - NO MARKETING NO ADVERTISING CAMPAIGNS - DISTRIBUTED AS A SERVICE TO CLIENTSHO/AFP/Getty Images

The insurgents also looted livestock and food in the fighting that began Wednesday and is continuing Thursday, Bakari told The Associated Press.

Boko Haram is using civilians as shields, making it difficult to confront them although reinforcements have arrived in Fotokol, according to military spokesman Col. Didier Badjeck.

The fighters are believed to have crossed into Cameroon from nearby Gamboru, a Nigerian border town from where they were driven out by Chadian and Nigerian air strikes and ground troops earlier this week.

The news comes as African Union officials are finalizing plans for a multinational force to fight the spreading Islamic uprising, although there are questions about funding. The African Union last week authorized a 7,500-strong force from Nigeria and its four neighbours, Cameroon, Chad, Niger and Benin.

Senior officers from the U.N. peacekeeping department are attending the meeting that started Thursday in Yaounde, Cameroon’s capital, said a U.N. official.

The Africans want U.N. Security Council approval and money to fund the mission, said the official who spoke Wednesday at the United Nations and insisted on anonymity because he was not authorized to speak to the press on the meeting.

International concern has grown as Boko Haram has increased the tempo and ferocity of its attacks just as Nigeria is preparing for presidential and legislative elections on Feb. 14.

Some 10,000 people were killed in Boko Haram violence last year compared to 2,000 in the first four years of Nigeria’s Islamic uprising, according to the Council on Foreign Relations.